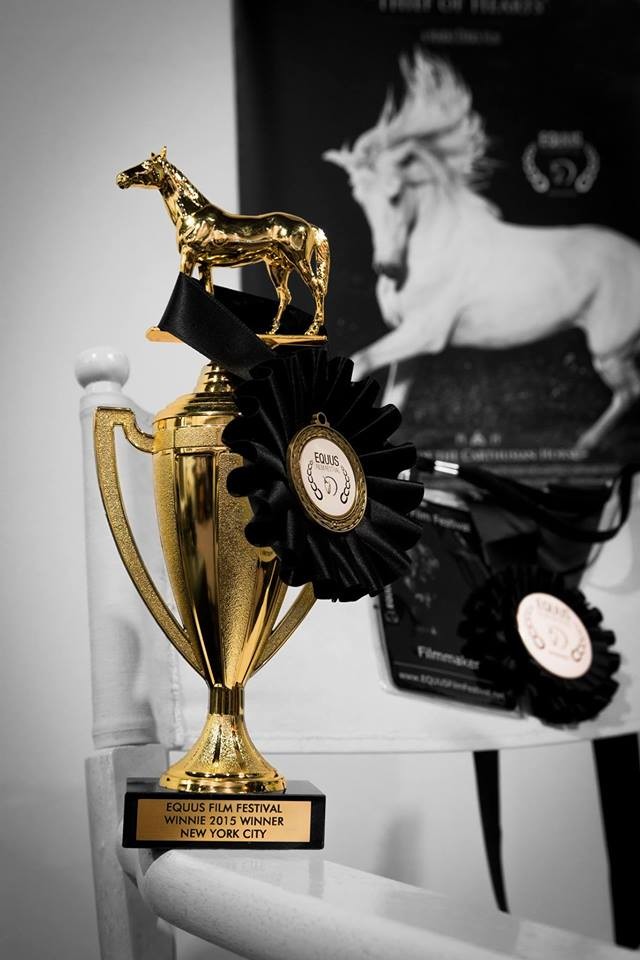 Candace Wade reports on her recent trip to NYC.

In addition to participating on a book writers’ panel and moderating a panel on Tennessee Walking Horse soring (check out her astute Horse Nation article on the topic here), HN writer Candace Wade had the opportunity to take in all the sights and sounds of the 2015 Equus Film Festival, held November 22-23 in New York City. She kindly reported back to us with some of the highlights of her trip.

Equine films, documentaries, discussion panels, print art, literature and the electric energy of audience anticipation whooshed warp-speed as I crossed the threshold of the Equus Film Festival NYC. The quality of national and international representation convinced me that saving my pennies for next year (ha! “save dollars”… it’s New York) is frugality with a blue-chip pay off.

An hour-by-hour menu of activities layered four thick — all deliciously enticing — made choices difficult. With three film screens, panels, authors’ pop-ups at the Ukrainian Restaurant two blocks away and hoards of horse-jiggy people to meet, I experienced much and missed more.

The following experiences and artists shone for me.

Two sculptures, “Blue Jean Jumper” and “Fleur,” watched over the award presentations with equestrian power and motion — one sculpted in denim, the other in paper flowers. They were created by 15-year-old Shya Beth from New Jersey, who happens also to be a Horse Nation contributor (check out her preview of the festival here) and author of the art blog The Flying Shetlands.

Shya explains that “Blue Jean Jumper” is the first of a series of about 12 blue jean horses she is making. “Each horse will represent different disciplines/breeds/mythological horses, travel to different equine shows/events/galleries and be signed by top riders/prominent people in their respective fields. Once every horse is full of signatures, they will be auctioned off to benefit horse charities globally.”

Shya is an incredibly gifted young artist and we’re all looking forward to watching her art career develop in the future!

Of the winners I was very much impressed by the “Commercial Film” winner, Get Your Heart Jumping, a documentary about Irish jump jockeys produced by Nathan Horrock of Equine Productions of the UK (check out the trailer here). Get Your Heart Jumping was commissioned by The Jockey Club and used innovative filming angles and latest technology to capture the athleticism of the racehorse and the skill of jump jockeys.

The film’s tagline “Those who don’t jump will never fly” didn’t take into account the audience’s sensation of flying as we soared over the jumps with the help of “jockey-cams” and a camera drone. We were in on the jokes as Nathan and his team cut up while facing choke-the-throat filming of the manic pace of Irish jump racing.

“Best TV Program” was won by Pamela Kettle with Wild About Barns on Ride TV. The production team scours the country for barns and the stories behind them. Small world: Pamela was familiar with my home of Franklin, Tennessee, having filmed the use of barn wood in two of my favorite dining spots.

A Sunday Horse, written by Fred T. Keuhnert and Vic Armstrong, won “Best Feature” and was named “Official Selection of the Li’l Herc Family Fest” at the festival. The Li’l Herc Fest offered free films for children on Saturday morning based on Hercules, the Lusitano owned by author Suzanne Kopp Moskow. Vic has worked as a stunt double in many films including for Harrison Ford in Indian Jones and the Temple of Doom. Yet to be released, the trailer for A Sunday Horse isn’t yet available but more information can be found on the IMDB website here.

Filmmaker Tom Lloyd of Dreamtime Film enchanted me with snaps and stories of his rare Fell Ponies and caravans of gypsy wagons. Tom’s Live Before You Die, highlighting the preservation and exhibition of his Fell Ponies, won “Art Film Mini“…

…and he also topped the “Music Video Short” category for his production of The Lumberjack Cowboy Heartbreak Trucking Co. song “Pony.”

The International Creators Panel showcased filmmakers from the UK, Switzerland, Canada, Netherlands, Spain, India and Italy. Get Your Heart Jumping — Behind the Scenes by Nathan Horrock was the featured adrenaline pump.

Paolo Boriani spoke with Italian-laced wonder and passion of his film Saga, based on the equestrian opera of the Giovanni Lindo Ferretti (singer, songwriter, composer). Paolo’s journey from Italy was rewarded when Saga won “Art Film Feature Length.”

At “The Right Side of the Track — The Positive Side of Horse Racing” panel, moderated by LA Pomeroy, I was taken with the film The Black Turf Project by Ken Browne of Ken Browne Productions.

“The Right Side of the Track” panel.

The panel with Jockey Ronnie Tanner.

The “Horse Defenders Panel” began at 8:15 p.m. with three films that wrecked my sleep: Born to Die, an exposé on milk mare foals; a piece on a disturbing horse neglect case in Marshal County, Tennessee; and the Humane Society of the United States’ undercover film Tennessee Walking Horse Investigation Exposes Cruelty, which appalled the nation when its visuals of soring and horse beating made the Internet rounds. The seven person panel included four film makers: Richard “Kudo” Couto, Katia Louise, Sharon Boeckle and Neta Rhyme.

I could feel the fizz of energy in the room when I took the helm of my panel, “Soring — What Are They Thinking?”

We began with three films:  AAWHA filmmaker Suzi Clark’s “Pass the PAST Act,” “See It Through My Eyes – The Big Lick,” a film created by Girl Scout Troop # 44 from Franklinville, New York, and the HSUS Tennessee Walking Horse film (shown above).

Hands shot up in the audience when I called for questions. We got the hook after two questions with the next panel impatient in the lobby. The panel, the audience, onlookers and I reconvened in the lobby to continue the energetic discussion.

The soring panel and audience.

They burst into the buttery leather elegance of the Manhattan Saddlery VIP Party, radiating all the expectant joy of warm-welcome West Texas.

I found this support-posse with the film Their Last Ride irresistible. Filmmakers Neta Rhyme and Michael Aku RoDriguez of So Be It Films  are dedicated to ignite awareness of the legal and black market horse slaughter whose trucks barrel past Neta and her husband Darrel’s mailbox on their way to the butchers in Mexico. Their team included Karen Harding, anti-slaughter advocate Sonja Meadows of Animal Angels, and Margo Holly Gulburnson with Saddle Up Clothing.

Yes, I was jealous when Karen told me about their rent-horse ride through Central Park!

I visited with film and horse enthusiasts from the west coast, east coast, the heartland, Canada and Europe. I met Robin Henry, the wife of my bookstall mate in the lobby. Her husband Dutch Henry is an equine advocate and author of It’s For the Horses. I also had the pleasure of meeting representatives from the New York State Horse Council, as well as Linda Harris and Dawn Mellen, president and founder of After the Finish Line Thoroughbred Rescue (you can check out my interview with Dawn here).

Interviews with a few attendees who traveled from far and wide for the festival: