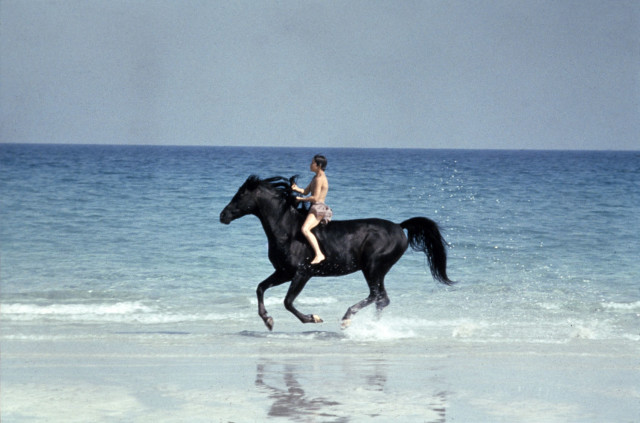 Do you remember the first time you saw The Black Stallion? I do, and vividly, because it pretty much rocked my world. Let’s relive that first iconic ride on the beach, one of my favorite movie scenes of all time.

A couple fun facts about the scene, via Turner Classic Movies:

-The beach scene was filmed in Sardinia, Italy. Locations there included Capo Caccia, Capo Camino, Costa Paradiso, Cala Ganone and San Teodoro, the latter of which featured a mile-long stretch of fine white sand perfect for the Black’s infamous beach gallop. Despite what you’d think from the video, it can be quite cold in Sardinia and the young actor who played Alec, Kelly Reno, shivered through scenes where he wore little clothing and was in the water.

-Kelly did most of his own riding, including the beach scene. A stunt double stepped in only for racing scenes, as he was too small to hold a thoroughbred galloping at top speed back.

-For about 80% of the film, the Black Stallion was played by Cass Ole, a Texas-bred Arabian show horse. (Amanda Uechi Ronan wrote a great piece on him for Horse Nation a while back — you can check it out here.) The owners of Cass Ole had stipulated that he was not to be used in swimming, fighting or racing sequences, so in these cases other doubles stood in. For the beach scene, it was a California-bred Arabian stallion named Fae Jur. The racing scenes were performed by an Egyptian Arabian stallion, El Mokhtar.