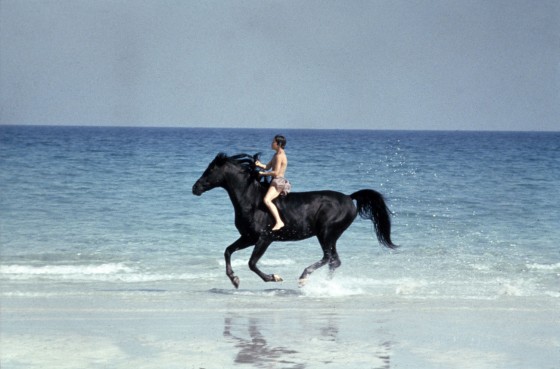 Amanda Ronan introduces to the Arabian show horse who performed one of the most legendary equine movie roles of all time.

Usually in my “Friday Flicks” posts I bring you snarky “bad movie” reviews or perhaps a headline reading “Kardashian impaled by glittered flip flop during Shetland pony beach ride!” — which would be a great headline by the way — but today I thought I’d take us on a stroll down memory lane with The Black Stallion (1979).

This film is possibly the most iconic horse movie ever made, at least for children of the ’80s. We all know it. We all love it. So I’m not going to waste time with a plot synopsis. What I am going to do is tell you about a Texas-bred Arabian who became an icon.

Cass Ole, born March 6, 1969, was National Champion in Arabian Western Pleasure in 1975, National Reserve Champion Arabian Ladies Side Saddle in 1976, and U.S. Top Ten Arabian English Pleasure in both 1975 and 1976. He won over 50 championships and over 20 Reserve Championships in his seven-year show career and was high point winner of the King Saud Trophy of the American Horse Show Association all before his movie debut!

Horse trainers Glen Randall, famous for his training of Roy Rogers’ Trigger, and his sons J.R. and Corky Randall found Cass Ole in San Antonio Texas. After quick negotiations with Ole’s owners, the Cuello family, Ole shipped out to California and then Canada to train for his role, including multiple riding sessions with costar Kelly Reno. Like all movie stars Ole also had “beauty sessions” which included dying his white star and white socks black as well as weaving a wig into his mane so that he better resembled the stallion of lore. Ole, upon his owner’s requests, did not do his own stunts such as the shipwreck scene, so three other horses were also bedazzled to appear identical to Ole on screen.

Cass Ole became an instant celebrity after capturing the hearts of audiences in The Black Stallion as well as his reprisal role in The Black Stallion Returns. In 1980 he won the Humane Society Award for The Prevention of Cruelty to Animals at the International Horse Show in Washington, D.C. He visited the White House and was present at the Inauguration of President Reagan. He performed before international audiences for the rest of his life with his last performance in Tacoma, Washington. His retirement show was under the direction of professional horse trainer George Gipson of Tenaha, Texas. He stood at stud at his home ranch in Texas, siring over 130 foals. Cass Ole was euthanized on June 29, 1993 after suffering from severe colic but will live on forever in the hearts of all those who beheld him, in life or on the screen, as The Black.