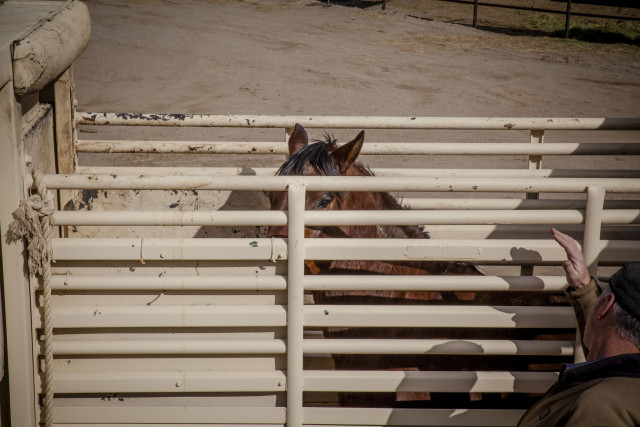 Suzanne Roy, director of the American Wild Horse Preservation Campaign, takes a look at the most recent mustang management scandal and offers a real solution to the problem of overpopulation.

Is this the smoking gun that will finally result in better treatment of our nation’s iconic wild horses and burros?

These animals have been mistreated for too long. Each year, thousands are harassed, chased down with helicopters, rounded up and warehoused in government holding pens. Right now, nearly 50,000 horses, born to run free, are living out their lives in cramped captivity.

And now we learn that, for some horses, things were even worse. In late October, the government issued a damning report detailing how the U.S. Bureau of Land Management violated its own rules and a congressional ban to send 1,794 horses to slaughter.

Between 2008 and 2012, the BLM sold truckload after truckload of captured wild horses to Colorado rancher and livestock hauler Tom Davis. Davis resold the horses to buyers who shipped them to Mexican “kill plants,” where they were butchered and sold for meat.

This was a violation of the BLM’s own policy of limiting horse sales and ensuring that any horses sold went to “good homes” and were not slaughtered. It also violated a congressional ban that prohibits the sale of wild horses and burros to anyone who intends to sell them for slaughter.

The report, issued by the Department of Interior’s Office of Inspector General, concludes that BLM employees continued to sell horses to Davis despite receiving reports that he was selling the horses for slaughter. Davis himself told investigators that “in selling him so many loads of horses, BLM had to know that the horses would end up in a slaughterhouse.”

And know they did. From top to bottom, this agency is failing to protect and preserve our cherished wild horses and burros. Worse, by rounding up and stockpiling nearly 50,000 wild horses in holding facilities, the BLM appears to be setting the stage for the mass slaughter of America’s mustangs.

It doesn’t have to be this way. A humane, cost-effective and publicly supported approach to wild horse management exists, but the BLM refuses to implement it on a scale that will turn this broken program around.

The tool is a vaccine called PZP. Administered by dart, it works as a contraceptive, preventing mares from becoming pregnant for up to two years unless they are revaccinated. A dose costs round $26 and the vaccine is not harmful to animals or to the surrounding environment.

In Colorado, PZP programs in Grand Junction and Disappointment Valley have ended helicopter roundups and minimized removals. The BLM should be doing this on a far larger scale, as recommended by the National Academy of Sciences in 2013.

Instead, the agency is galloping ahead with roundups (a mass removal of 1,400 wild horses from federal lands in Oregon started earlier this month), and spending less than 1 percent of its $80 million budget on humane fertility control, while over 70 percent is spent to roundup and warehouse horses.

The BLM is also devoting $9 million to research into dangerous, expensive and logistically complex ways to permanently sterilize animals that contradict National Academy of Sciences recommendations. It is just wasting more time and money when an effective tool is at hand.

Within the agency, there are still those who prefer the current, unworkable system and view slaughter as a solution. But the American people don’t. In fact, 80 percent of the public opposes horse slaughter.

With the slaughter scandal making headlines, the Obama administration and Congress must not allow BLM to sweep the findings under the carpet. It’s time this agency is held accountable.