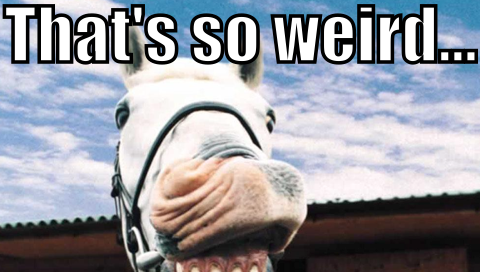 Welcome to our newest column, Weird But True Horse Facts! This week we’ll be digging through a little history.

In January 1896, farmer Thomas Folk was returning to his Friedensburg Road farm from a Reading market when his horse began to stagger as it pulled its carriage on Perkiomen Avenue and into what is now Mount Penn. Folk pulled his wagon into a small wayside stop with a water trough and took a closer look at his horse. The farmer cracked open a thin sheet of ice, removed the check rein from the horse, and the animal quickly dunked its entire head in the icy water. Folk quickly removed the horse from the water, only to notice a strange dark cord protruding from the nostrils of the horse. A story in the Reading Times continued the frightening tale. “With considerable difficulty, Mr Folk managed to extract the supposed cord and was almost overcome when he discovered it was the tail of a mouse. “By this time, the mouse had worked its way out of its unpleasant quarters, and dropping to the ground ran rapidly across the road and disappeared. “For some time, the horse’s nose bled, but soon the steed shook off and appeared to be completely relieved.”It is supposed the mouse was in the hay,” the story continued, “and in this way managed to get into the animal’s nostrils.”

While the story may sound anecdotal, I happened across this truly strange photo via Reddit. Can we all say a collective, “Ew!”

Old Billy was born in 1760 in Woolston, Lancashire, England and worked as a barge horse. A local celebrity in his heyday, Old Billy died on November 27, 1822 near Manchester. The horse was depicted in a lithograph from 1820 and was also painted by an artist named W. Taylor. Now Old Billy’s skull, which shows his age in its worn teeth, is in the Manchester Museum. His white and brown furred head is held by the Cecil Higgins Art Gallery & Bedford Museum.

Painting of Old Billy by W. Tayler (via BBC)

The Nisean Horse is the original “superhorse.”

The first written reference to the Nisean horse was in 430 B.C, written by Herodotus:

“In front of the king went first a thousand horsemen, picked men of the Persian nation – then spearmen a thousand, likewise chosen troops, with their spearheads pointing towards the ground – next ten of the sacred horses called Nisaean, all daintily caparisoned.”

The ancient Greeks named the Nisean after the town Nisa; the Chinese called the horse “Tien Ma,” or Heavenly Horse. Originally bred by Persian nobility, the Nisean horse was so sought after the Greeks imported Niseans to breed with their native stock. Many nomadic tribes, such as the Scythians, also imported, captured, or stole them.