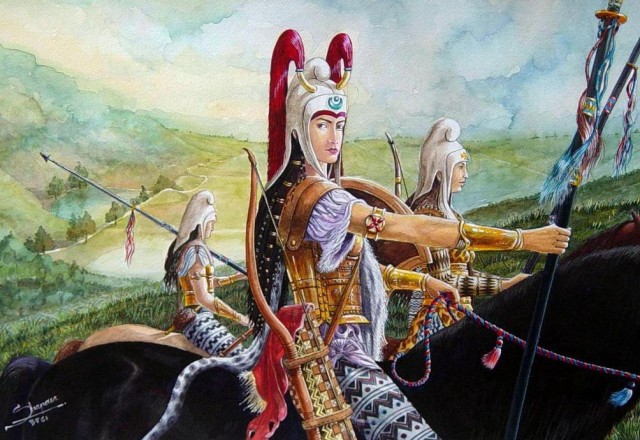 Scythian women were kicking butt and taking names from the 7th century BC to the 2nd century AD.

The Scythians migrated from central Asia to southern Russia, centering over the present day Crimean peninsula, in the 8th and 7th centuries BC.

The tribe was artistic, violent, and comprised entirely of excellent horse riders. They were among the earliest people to master horseback riding, a tactical advantage that astonished and overwhelmed their neighbors. Every Scythian had at least one personal mount, but the wealthy owned vast herds. Most of the horses were the Przewalski’s horse, the only horse native to the Eurasian steppe. Rarely, archaeologists unearth a second type of horse built more like a Thoroughbred.

Ancient Worlds reports, “The most perfectly preserved horse found at Pazyryk is a 12-15 year old thoroughbred-type dun mare of about 13 hands high, which would be about average height for Scythian horses. She was saddled with highly ornamented bone, wood, leather and felt tack, including a ‘stag mask’ with large stylized antlers, and her tail was tied together into a single long strap. She appears to have had long-term arthritis in her near hind leg, which maybe suggests she had been a favorite, cared for despite her lameness until she could be buried with her owner.”

Scythians utilized simple saddles consisting of felt, hair and leather. Each saddle had a highly decorated covering that was a piece of art in itself. There were no stirrups.

They also created elaborate head dresses for their horses. One can imagine how these “fantastical creatures” appeared to sedentary farming communities.

But that’s not even the coolest part, folks. Burial mounds, or kurgans, have revealed strong evidence that women rode horses. Archaeology magazine reads, “The bowed leg bones of one 13- or 14-year-old girl attest a life on horseback, and a bent arrowhead found in the body cavity of another woman suggested that she had been killed in battle.” The author of the article believes these ancient equestrians could be the source for the legendary “Amazon Women” as described by Greek author Herodotus. One of the most famous archaeology finds from the area is the ‘Siberian Ice Maiden’ found in 1993.

The Ice Maiden died at the age of 25 from breast cancer, though initial research found evidence she suffered a fall from a horse. She was buried with six horses, all saddled and bridled, to signify her high status. She was covered in tattoos, many of which appear to be images of horses wearing the stag headdress. Her head was shaved and she was found wearing a wig made from horse hair.

The Ice Maiden wasn’t a warrior, though. Most likely she was a spiritual leader, due to the various herbs found with her remains as well as the isolated nature of her burial. The warrior women were buried with their weapons, primarily bows and knives. National Geographic reports, “With the advent of DNA testing and other bioarchaeological scientific analysis, they’ve found that about one-third of all Scythian women are buried with weapons and have war injuries just like the men.”

Researchers are quick to point out, however, that Scythian culture was not a “female dominated barbarian society” as depicted in Xena: Warrior Princess. It simply afforded women more equality. You could say Scythians rode #likeagirl.