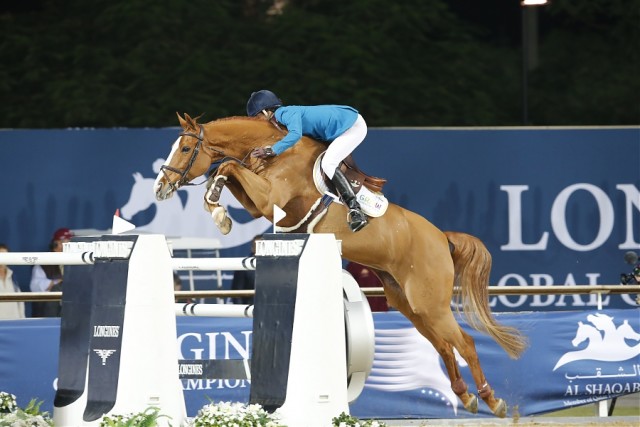 In a down-to-the-wire final round in Doha, Qatar, Luciana Diniz of Portugal edged out the best in the world to capture the 2015 Longines Global Champions Tour title.

The Global Champions Tour, presented by Longines, never ceases to produce nail-biting showdowns at venue after beautiful venue all around the world. (And we mean it when we call them beautiful: last week we shared eight of our favorite venues in all of their glory.) Going into last weekend’s season finale in Doha, Qatar, three riders were each poised to be able to capture the championship: Great Britain’s Scott Brash (the defending two-time champion), Portugal’s Luciana Diniz and Sweden’s Rolf-Göran Bengtsson.

To give you an idea of just how close of a race it was between these top three, the Global Champions Tour noted in a press release:

And in seemingly typical nail-biter fashion, the first round of the finals created a perfect storm for a thrilling final round: Brash aboard his two-time champion Hello Sanctos knocked a rail while Bengtsson set a clear, fast round to temporarily take the lead with Casall ASK. Diniz and Fit For Fun beat Bengtsson’s time with a clear round themselves; Brash just made it within the top 15 to come back to the second round. Heading into the second round, Bengtsson needed to go double-clear to clinch the championship while Brash and Diniz each had to attempt to beat the other as well as Bengtsson in order to win.

Brash brought down another rail in the second round and while he was still poised for a few more trips to potentially be in contention for the overall title, he was eventually pushed down to eighth place and lost his chance at winning a third Global Champions Tour — a feat never accomplished in the tour’s history. Bengtsson turned in another fast, clear round, followed shortly after by Diniz, keeping the championship race tight.

Three riders went clear in the jump-off round: Bengtsson and Casall ASK put in another textbook round, but it wasn’t fast enough to edge out Meredith Michaels-Beerbaum of Germany aboard Fibonacci. As Luciana Diniz entered the arena aboard her chestnut mare Fit For Fun, she had already won the tour title — but taking Doha as well would be the icing on the cake.

See for yourself just how close the jump-off round really was:

Our congratulations to Luciana Diniz! Best of luck in 2016.