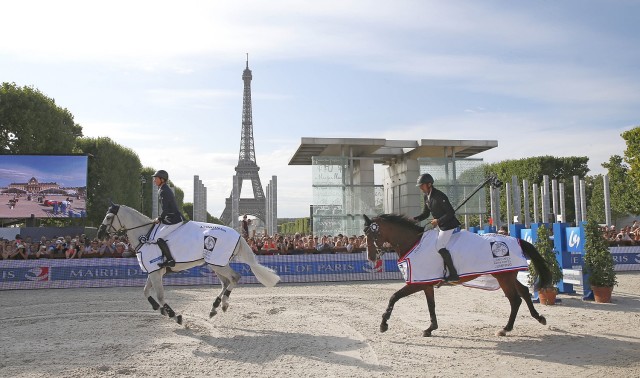 The 5* show jumping tour, which wraps up this weekend in Doha, includes 15 events spanning 13 countries. From Monaco to Madrid to Miami Beach, and each of the venues is breathtaking in its own way.

All photos courtesy of Stefano Grasso/LGCT.

Only one competition of the 2015 Longines Global Champions Tour remains, to be held this Saturday in Doha.

The stage is set for a thrilling grand finale: World number 1 and current leader Scott Brash (GBR) currently sits at the top of the leaderboard and will make history if he is able to take his third consecutive title — a feat that’s never been achieved before on the Tour. Luciana Diniz (POR) is the next highest rank leader, sitting just two points away from Scott, and will be fighting to take her first Longines Global Champions Tour title. Two-time Silver Olympic Medallist Rolf-Göran Bengtsson (SWE) is the final rider who has the potential to take the title, having come runner up twice before.

Up and down the ranking board there is the potential for high drama. Only the riders’ top eight scores throughout the season will be counted, meaning that the greatest number of points possible will be high on the agenda for the Grand Prix. With a bonus of €1 million on offer for the top 18 ranked riders, as well as the €450,000 Grand Prix of Doha prize fund, there’s everything to play for in this final round of world-class competition.

Keep it locked here for a full report on the Tour’s conclusion. Go Riding!