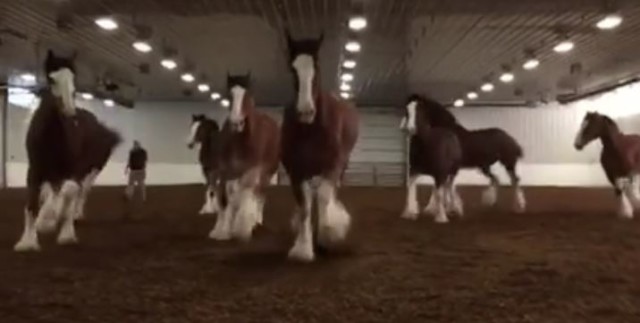 Under the right circumstances, we’re certain this could set be measured on the Richter scale.

Dawn Fire owns Peeper Ranch in Lenexa, Kansas, and while her main business is performance Morgans, it seems they also managed to squeeze in a few extra gentle giants to their lovely space for a quick, irresistible video. According to Dawn, the Clydesdales occasionally lay over at her facility when they are passing through town on their way to and from performances.

More often than not, we’re enjoying the Budweiser Clydesdales performing magnificent maneuvers in a hitch, or occasionally acting in a Budweiser commercial. But rarely do you just get to see them frolicking like the big athletic jocks that they are.

The impressive team of eight, even at play, seem incredibly synced with each other’s movements and direction. Is there ever anything those Clydesdales do that doesn’t stop us in our tracks? Personally, I’d pay money to watch them sleep.