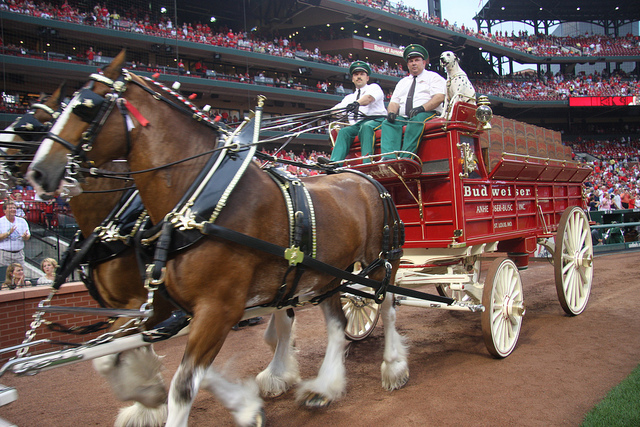 The Budweiser Clydesdales at the Cardinals’ Busch Stadium. Photo Courtesy of the United Way of St. Louis via Flckr.

In my house, the opening weeks of baseball season are a sacred time. You’ve recovered from whatever happened to your beloved team the year before, you’ve spent the long cold winter stoking the fires of hope, and analyzed every player and every statistic to death through spring training. Not unlike us horsemen emerging from the melting snow drifts to clip our mounts and mark our calendars with expected weekends of triumph in the months to come, spring is what happens when winter dreams can finally come to life.

All the magic of everything that is good about spring (green grass, baseball, and ponies) is contained in this single event: The Budweiser Clydesdales taking the field at Busch Stadium for the opening home game of the St. Louis Cardinals.  As you can see in the picturesque video below, a jolly stadium pipe organ accompanies the 8-horse Budweiser team around the ‘warning track’ (so called because it tells the outfield players chasing a ball in the sky that when you hit dirt, you’re also about to hit a wall). The team is carefully guided not to step foot on the grass, instead intricately maneuvering the many twists and turns of the field’s narrow perimeter.

While the 2015 footage is from the nosebleeds, it’s actually quite a spectacle to see the whole field, the St. Louis skyline, and the tens of thousands of fans all beholding the mighty Clydesdale Team with such enthusiasm.

The Budweiser Team at the Cardinals Home Opener is actually a longstanding tradition of several decades, and even the players can’t help themselves when the big boys come romping past the dugout.

“Our guys, we always laugh, because when we go down in the tunnel the players all come out, ” Jeff Knapper (general manager of Budweiser Clydesdale Operations) told ESPN in 2013. “They know we’re there. They must make an announcement because the players and coaches all come out and they’re always in awe.”

Previous years’ footage will give you a more up-close and intimate introduction to the Budweiser Team at the home opener:

And if you ever wondered how they get the horses and the rig to the stadium, well, they walk there!

The Clydesdale team at Busch Stadium was such a huge hit that five other MLB cities have also utilized the Team for their home openers, but St. Louisians will happily remind you that they did it first and best.