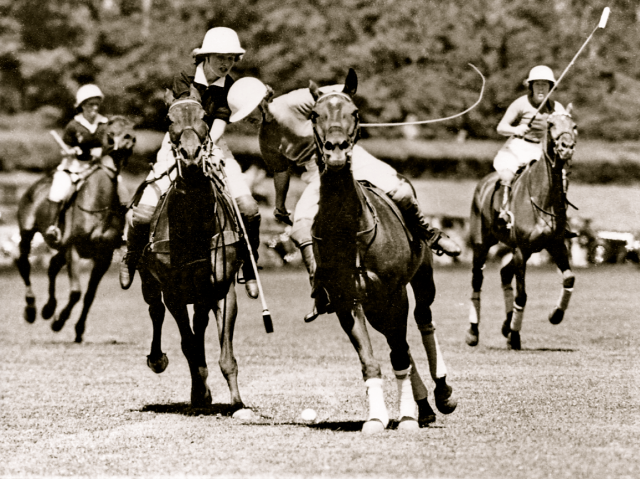 The author of Comin’ Thru: The Golden Age of Women’s Polo 1934-1941 sits down to talk horses, celebrity equestrians and an Argentine marriage proposal!

Hi Colleen! Welcome to Horse Nation! Tell us a little about your childhood at the infamous Wheeler Ranch and your introduction to polo.

When I was 12 years old, my sister, Elaine, my Mom and I moved from Southern California to Santa Cruz to live at Windy Hill Farm on the Wheeler’s 80 acre horse ranch. Dorothy Wheeler and her husband were 1st cousins and did not have children. Mr. Wheeler raised Thoroughbred polo ponies and had some 40 head. At age 12 it was my job to help train some of the horses for polo and during the year, when I was not at school, I rode 7 days a week. It is important to note that Mr. Wheeler did not train the horses before their legs were strong enough, at five years old. At no time were whips or spurs allowed; everything was done with love. During the summer and spring I rode 7 days a week training the horses, and I loved it!

Do you have any horses from your time at the Wheeler Ranch that you still remember today? Tell us a little about them.

There was one 17hh polo pony – a very unusual size – named Sleepy. He just didn’t want anything to do with me at first, so I brought cubed sugar to him everyday.  After a few weeks of that, I was able to slide down his backside and any number of other tricks. He loved his sugar!

Your sister was also an amazing polo player. Tell us a little about her career.

My sister Elaine McInerney, who was five years older than me, started playing polo at age nine. Her coach Snowy Baker believed girls and boys were equal in ability. When Elaine was nine she was called in to play practice rounds and played with players like Walt Disney and Spencer Tracy. Mr. Tracy admired my sister’s ability so much, he loaned her some of his horses from his string of ponies.

You both played at the famous Pogonip Club in California. Tell me a little about the time you spent there.

The Pogonip Polo team won the State Championship for seven years in a row and I first became a member of that team at age 14. The women played polo games each Saturday and Sunday just before the men’s matches. As I remember Riviera had at least three to four polo fields at the time.

The Argentines who came to Pogonip in 1942.

The Argentine players were in San Francisco on business and wanted to play polo when they heard about the Pogonip Club in Santa Cruz. Since most of the men had gone off to war, and when the three Argentineans found out what fine polo players the women were, they decided to stay the entire summer and play polo with us. Pictured above, on the very left is the Argentine Conciliate from San Francisco, Fernando Mihanovich. He asked to come to Pogonip to look me over, as Fernando wanted to marry me! I was all of 16 years old and was in love with my childhood sweetheart and was not about to go off to Argentina!

Winston Churchill once said, “A polo handicap is your passport to the world.” Do you think that rings true? How has polo affected your life?

I agree with Winston Churchill as I met many people in this world that, if I had not played polo, I would not have had the opportunity. Polo gave me that chance to meet people from around the world and the old saying is very true, “It is not what you know, but who.”

If you could give one bit of advice to a young girl dreaming about playing polo, what would that be?

If there is any suggestion that I would have for young girls that love horses, it is to volunteer at a horse ranch. Take any job you can to help around the ranch. If you are lucky they will recognize your love of the horses and may let you exercise them. Show them how much you care and always treat them with love and respect, people too!

Thank you so much, Colleen!

All photos courtesy of Colleen McInerney Meagher. These beautiful images and many more can be seen in her book Comin’ Thru: The Golden Age of Women’s Polo 1934-1941, due to be published in the spring of 2016!