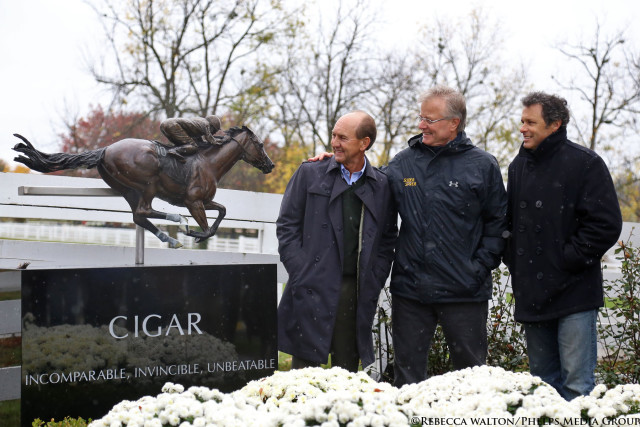 In honor of this weekend’s Breeders’ Cup as well as the recent unveiling of the Cigar memorial at the Kentucky Horse Park, we’re revisiting one of the great stallion’s most exciting victories in the 1995 Breeders’ Cup Classic.

Early October marked the one-year anniversary of the passing of race legend Cigar, a formidable bay stallion by Palace Music out of Solar Slew (a Seattle Slew mare). His racing career of the mid-1990s is still remembered as one of the greatest feats in racing, as Cigar tied Citation’s record of 16 straight stakes victories against top competition. Included in this streak was the Dubai World Cup, which is notoriously difficult for American horses who ship to the opposite side of the planet to compete.

One of his most exciting victories was undoubtedly the 1995 Breeders’ Cup Classic, in which Cigar set a record despite the sloppy conditions:

Cigar, unfortunately, proved to be sterile as a breeding stallion and was retired to the Kentucky Horse Park to live out his days in the Hall of Champions, visited by fans who were thrilled to get the opportunity to meet a living legend. He passed away at age 24 due to complications from surgery intended to alleviate spinal compression.

A new memorial statue was unveiled on Tuesday, October 27, 2015 at Cigar’s final resting place at the Hall of Champions. Engraved on the base are the words used to describe Cigar: “incomparable, invincible, unbeatable.”

The Breeders’ Cup takes place this weekend at Keeneland in Lexington, Kentucky, just across town from the Kentucky Horse Park. Keep it locked on Horse Nation for a preview as well as results!