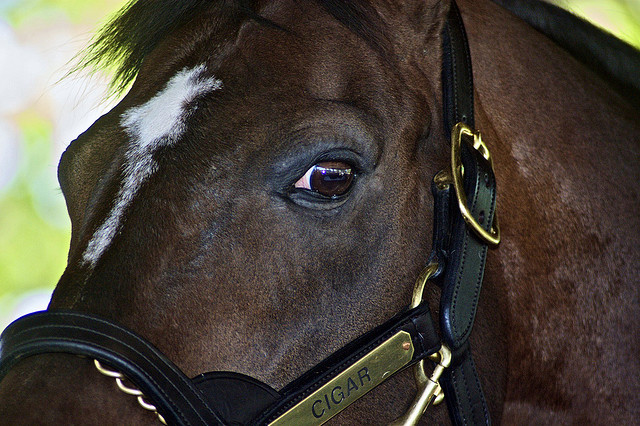 The iconic racing legend was not only one of the few living legends of the incredible era of horse racing in the 1990s, but had also become an enormous crowd favorite from horse lovers of every discipline who had the chance to visit or compete at Kentucky Horse Park.

Sired by Palace Music to Solar Slew (by Seattle Slew), Cigar was the first horse since Citation in 1950 to win 16 consecutive Stakes races. He was a late bloomer by racing standards; he did not race at all as a 2-year-old, and raced with only mediocre results as a 3-year-old. It was in his fourth year that Cigar turned up the heat after being paired with the one and only Bill Mott, and the stallion won the Grade I NYRA Mile (which has since been renamed the Cigar Mile Handicap) by seven lengths.

As a 5-year-old, the horse went on a tear all over the country, winning competitive challenges that included the Hollywood Gold Cup, The Woodward Stakes, and the Breeder’s Cup Classic. He was named Horse of the Year for his perfect season.

As a 6-year-old, he went on to win the Donn Stakes in Florida and then flew 6,000 miles to try his hand at the inaugural Dubai Cup, which had an unfathomably large purse of $5 million. Cigar won it by a length. Despite the strain of extensive travel, the stallion came home in fantastic shape, and repeated a previous win in the Massachusetts Handicap. His final consecutive win was the Arlington Citation Handicap, which was billed as a match race against the formidable Dramatic Gold and Unbridled’s Song, was also won.

He finally saw a loss in a tough trip at the Pacific Classic Stakes, and except for one final win at the Woodward Stakes, Cigar’s peak had passed. He won Horse of the Year for a second year in a row, and was retired just shy of being the first horse to break the $10 million mark, with winnings totaling $9,999,813.

When Cigar went to stand at stud, it was discovered that the poor boy was shooting blanks, and none of the 34 mares he covered were ever pregnant. So in 1999, it was decided that he would go to live as a permanent fixture of the Hall of Champions at Kentucky Horse Park, where he could meet his adoring fans and provide unforgettable opportunities for education to the masses.

According to the Kentucky Horse Park Press Release, they sought surgery to make Cigar sound and comfortable in his senior years, and performed a surgery to address spinal compression in the sixth and seventh vertebra. According to Dr. Rocky Mason’s statement in the KHP press release, “The decision to seek out a more lasting treatment modality was made. Surgery is never an easy decision in a 24-year-old horse, but Cigar had proven himself a regal, classy and determined patient making the decision to proceed an easier one.”

While the surgery was successful, recovery proved too much, and Cigar fractured his vertebra during recovery and passed away.

Cigar will be buried on the Memorial Walk of Champions alongside fellow champions Alysheba, Bold Forbes, Forego, John Henry, and Kona Gold, where his adoring public can continue to admire one of the most glorious, storied, and majestic thoroughbreds of our time.