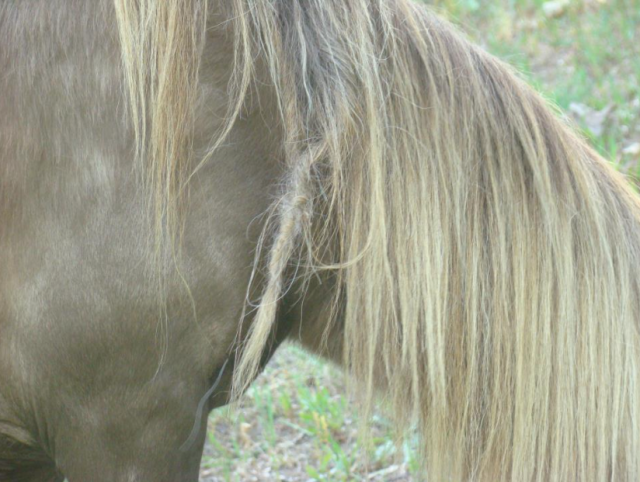 Bad news, those tangles in your horse’s mane were put there by witches, fairies and Bigfoot.

The urban myth about “Witch Knots” in horses’ manes has changed over the centuries – alternating between blaming fairies, witches, thieves, gypsies, Pagans and Bigfoot – but no one quite knows where the story started.

Some believe the origin lies with the “Wild Hunt,” an ancient European folk myth. First written down by Jacob Grimm, of the Brothers Grimm fame, the Wild Hunt depicts a ghostly group of huntsmen with horses and hounds in a mad dash across the skies. Seeing the Wild Hunt was thought to precede some catastrophe such as war, plague, or the death of the one who witnessed it.

The female in the front, wearing the red skirt, is said to be the goddess Diana. The Canon Episcopi, a 10th Century text, describes Diana and her followers as “evil women” in league with the Devil. One thing led to another – mainly, the Spanish Inquisition – and pretty soon every horse owned by a woman and found with tangled hair … belonged to a witch.

As times changed, so did the folklore.  William Shakespeare hopped on the band wagon with his attributing “plaits” to the fairy Queen Mab in Romeo and Juliet: Act One, Scene 4.

She is the fairies midwife, and she comes
In shape no bigger than an agate stone…
That plaits the manes of horses in the night
And bakes the elflocks in foul sluttish hairs,
Which once untangled, much misfortune bodes.

Most recently, Melba Ketchum, a veterinarian that claims to have sequenced the Bigfoot genome, has posted a picture of horses that supposedly had their manes braided by a Bigfoot.

For a frighteningly in-depth look at the history behind Witch Knots, check out this research paper.