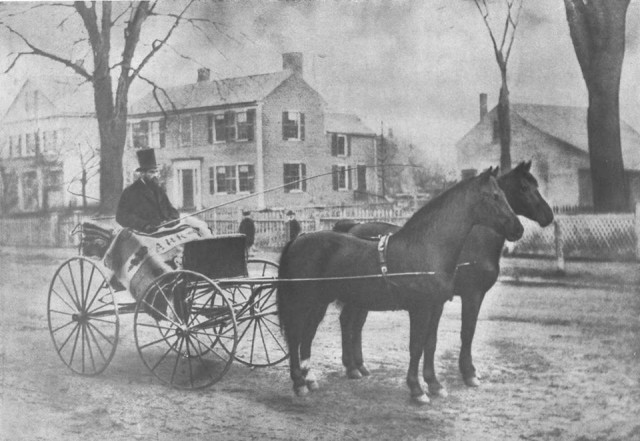 This baller DROVE his horses without bridles or full harness. Unfortunately, he left us no record of how he did it. 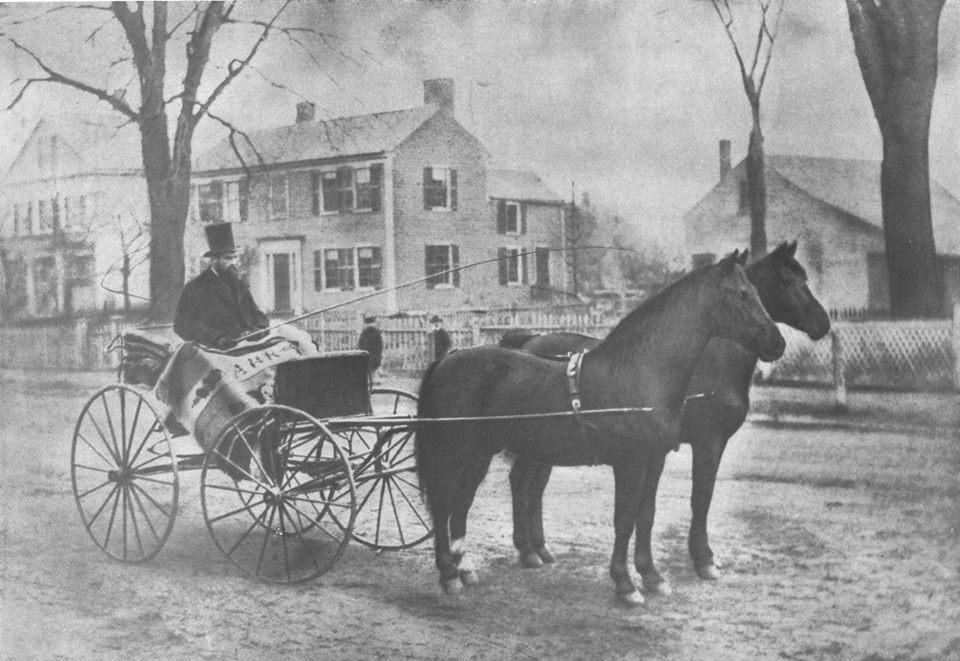 While you may look at this photograph and think “nah, that’s definitely Photoshopped,” this is in fact an actual undoctored photo of Amos H. Rockwell and his two Morgan stallions, Morgan Tiger and Morgan Star. Rockwell was famous all over the Union for driving horses without bridles or full harness: the horses were hitched to the carriage only with a surcingle. They were guided only by Rockwell’s voice and his driving whip, and could walk, trot and even sometimes canter, both alone in demonstration and on busy crowded roadways, darting in and out of other wagons. This photograph was taken in the mid-1860s.

Backing up this image is Volume 17 of Country Life in America, a book-length magazine printed in the nineteenth and twentieth centuries and published by Doubleday, Page, & Company. The 1909 volume details Rockwell’s feats of horsemanship:

While [the Morgan breed] was in its zenith in public favor, Mr. Amos H. Rockwell astonished the horse world by driving a team of Morgan stallions in the open street without the use of reins, guiding and controlling them only with the use of a ten-foot whip. These horses were driven and exhibited in every state in the Union and very thoroughly demonstrated to all beholders some of the Morgan’s strongest attributes, which are great intelligence coupled with docility and fearless courage.

Boom. And here I was, thinking that the idea of bridleless performance at the highest levels was relatively new, jettisoned to the spotlight by such trainers as Stacy Westfall, Lynn Palm and Dan James. (I’m sure that people have been hopping on horses bridleless since the domestication of the horse, but probably not taking them on the road to show them off.)

But how did he do it? Riding a horse without a bridle is one thing, when you have your leg and seat aids to do most of the work anyway. (I’ve done this myself — not as well as Stacy Westfall, but I made it through the performance to tell the tale.) But driving a horse without a bridle and reins is something else entirely. (I’ve done this myself too, only it was by accident and it was one of the most terrifying moment of my life.) 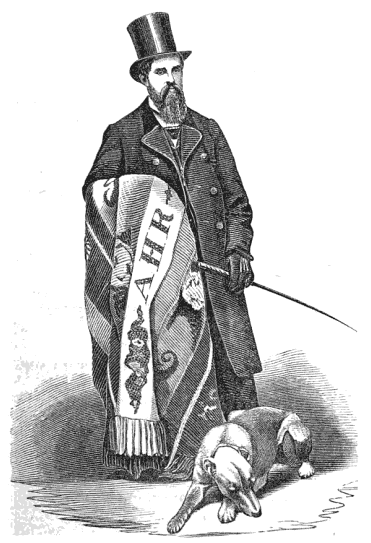 Every ballin’ horseman needs a customized lap robe with his initials. Illustration from The Improved and Practical System of Educating the Horse.

Fortunately, Mr. Rockwell wrote a book, which is available as a free eBook: The Improved and Practical System of Educating the Horse.It’s prefaced with details of his totally bad-A bridleless driving horses and how he acquired them, starting with the stallion Morgan Tiger:

This horse was sent to us at our residence in Broome county, N.Y., to break of a very vicious and long-standing habit of frequently frisking and kicking when hitched to a wagon […] We applied to Tiger our system, with marked success, and in sixteen days from the time he came into our possession we exhibited him before the Susquehanna County (Pa.) Agricultural Society; to the utter surprise of the people, driving him — to a sulky — without reins, rapidly around the track — turning, stopping, and starting, with perfect success.

Unfortunately for those of us waiting with bated breath to learn the secrets of bridleless driving, Rockwell had this to say: “The driving of horses without reins not being of practical utility to the public generally, it does not come within the scope of our instructions.” Come on, Amos. It may not be practical, but it’s still pretty darn cool.

Rockwell outlines his entire training philosophy, which to read on its own sounds very promising considering that animal welfare was a fairly foreign concept in the mid-1800s:

We have a higher and nobler aim than to merely tame and subdue this valuable animal. Our object is to educate him — to operate through such intelligences as are given him; and by careful, patient, and kind treatment, guide, direct, and teach the horse what is required of him. You may, perhaps, by harsh and cruel treatment, break his spirit and compel him, through abject fear, to obey certain commands, but unless you accompany your acts, which should, as far as possible be gentle and humane, by some method which will convince the intelligence of the horse, and which will therby make a lasting impression, you have not reached the true theory of Horse-Training.

Preach, Amos! The rest of his book details various methods for starting colts in halter and in harness, as well as trick-training and troubleshooting the problem horse. (Bonus sections include methods for teaching dogs as well as cattle.)

Of note is his name-dropping of one “D. Magner,” who, “upon hearing our system, dropped the old systems which he had been practicing, and adopted ours. He has since written a book upon the Training of the Horse […]” Lorraine Jackson outlined some of the practices that could be found in Magner’s book in the past, and while we certainly don’t think they these practices have a place in modern horsemanship, we have to admit that if they’re a step up from the mentioned “old systems” then we’re glad that horsemanship seemed to be at least moving in a more positive direction through these trainers. 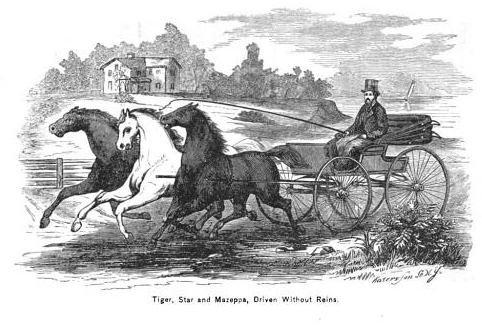 Rockwell’s bridleless three-abreast. Illustration from The Improved and Practical System of Educating the Horse.