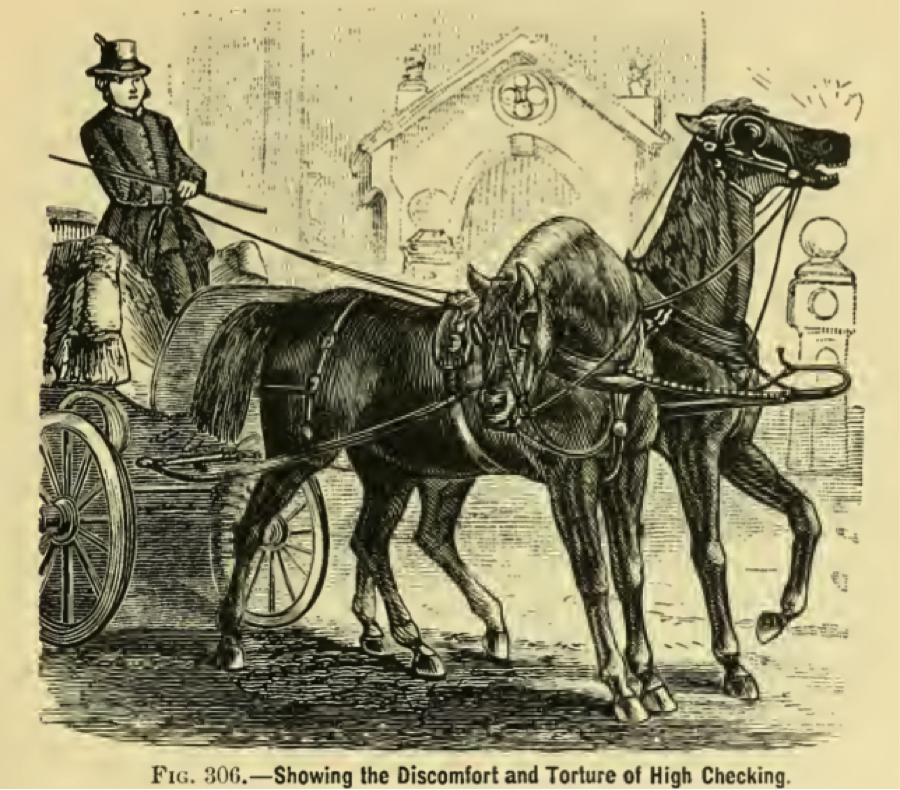 Or, “A Review of The Standard Horse Book: Comprising the Taming, Controlling and Education of Unbroken and Vicious Horses.”

All images are from The Standard Horse Book: Comprising the Taming, Controlling and Education of Unbroken and Vicious Horses, and are in the public domain.

Just from the title of  roving horse trainer’s Dennis Magner’s 1895 book, you can pretty much be assured that it’s going to be a cringe-worthy ride through archaic horse torture that once passed for “taming, controlling and education.” And it is.

It starts out with a cast of characters:

Wild Pete says, “What are you doing with that rope?!”

Are you sure it was a mustang and not a chupacabra?

Well, there’s no need for name-calling.

And the various methods used to subdue them:

What happens next isn’t pretty.

I would not touch this with a 10-foot pole. (Yet that’s exactly what’s recommended to desensitize a ‘vicious’ horse to having its legs touched.)

So why did I read it?

I kept finding little nuggets of kindness and humane treatment that contrasted things that just seem insane and cruel today–like flipping horses over, or tying their noses to their tails to make them dizzy and submissive. For example, Magner recommends putting sharp tacks on the inside of a specially made throatlatch to teach a horse not to crib. Yet he is against using severe bits on a long-term basis. So what gives?

Surprisingly, it really did seem that Magner, despite his forceful, unpleasant methods, really did like horses and did not want to see them treated badly:

While engaged in making illustrations for this work in New York City, I daily passed through Fulton and other streets, and frequently took a side street to avoid witnessing the abuse to which horses were subjected in consequence of being overloaded. It was no unusual thing to see a team whipped severely while pulling to their utmost power, and finally compelled to stop for want of strength to go farther. A team never should be compelled to draw more than it is able to pull easily over the worst parts of the road. This should be the rule.

He also dedicates an entire chapter against the use of the “check-rein” (which you’ll remember as the fashionable driving device Black Beauty hated so much) and also mentions at several points his disapproval of  blinders, severe bits for regular use, and people who neglect or abuse any equine, especially mules, which he had a special fondness for. Magner’s overall strategy boils down to: Use force–but only when necessary.

A more humane alternative to the overcheck rein

I don’t mean to excuse Magner’s extreme methods and chalk them up to ignorance of better horsemanship. As we learned in Black Beauty, ignorance “is the worst thing in the world, next to wickedness…and which does the most mischief.” I never really quite puzzled out what constituted the line for Magner between cruelty and training (it seemed to be an arbitrary assortment of practices he found abhorrent versus those he was OK with). However, I found it very interesting to consider how far we’ve come in some areas (just sayin’, I would love a Back on Track Snuggy for my workouts…) and how far behind we still are in other aspects of treating horses humanely. Each discipline has its own faults that individual riders need to work hard to correct, and reading this strange treatise just made me even more aware of the need to put the horses first.

If you would like to check out The Standard Horse Book: Comprising the Taming, Controlling and Education of Unbroken and Vicious Horses, it’s available for free in several file formats from the Internet Archive.