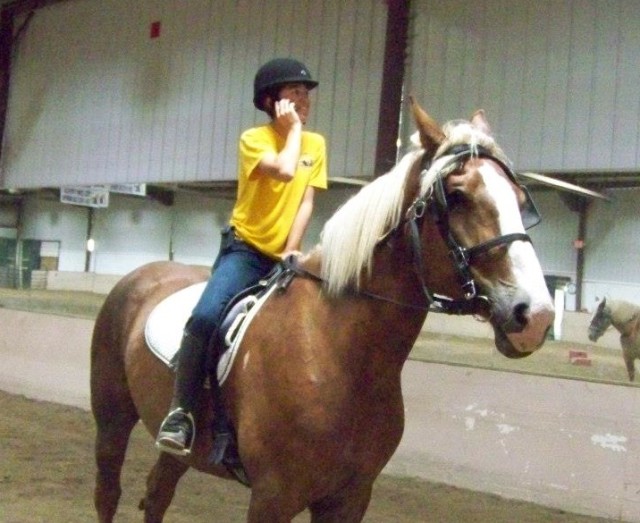 It’s like ‘A Million Ways to Die in the West’ … but the cell phone version. Here are YOUR phone obituaries, equestrian-style.

I don’t remember what was so urgent that I had to use my phone while sitting on a draft horse… but it must have been critical.

If you missed out the first time, make sure you check out our “19 Ways to Kill Your Phone at the Barn“. These are the sometimes-sad-but-mostly-hilarious reader responses for how they’ve killed their own phones.

Brittany Tegan: “Dropped mine in a water bucket. It kind of survived, but I had to put it on speaker to accept calls. I now have a phone that is water resistant 3′ for 30mins.”

Meagan Killen: “I had a horse think it was treat and take it from me. Before I could grab it back, I heard ‘CRACK!'”

Tiena Joyal: “Dropping it in the barn aisle, shattered the screen.”

Kara Kask: “I dropped mine in my horse’s wet bran mash. It died and I took it to the store to see if they could do anything about it and the guy opened the back and looked at the bran stuck inside and gave me the dirtiest look. It was then I realized that wet bran mash looks a lot like vomit to the uninitiated. It actually started to work a few days later when it dried out! And it worked for a couple of years after that!”

Tiffany Kueber Galletta: “Phones do not survive well when dropped in a bucket of milk replacer while try to feed lambs!”

Leah Louise: “I drowned mine in my saddle bags one time. I was trail riding, and a can of beer mysteriously sliced open in the same pocket as my smartphone. Soaking in beer for who knows how long leads to a very dead (and sticky) phone.”

Whitney Soares: “Gravel driveway at the barn. I had tucked it in the waistband of my breeches but it fell out as I got out of the car. Still works fine but has some nice cracks in the screen.”

Lisa Devlin: “Had mine in my rain jacket pocket while on a cross country course walk… my pocket filled with rainwater before I realized it… then dumped a water trough and didn’t realize my phone had fallen out of my pocket.. left it in a puddle for a bit before I realized it was gone, and ran over one with my truck.”

Tanya Bell: “My QH gelding Buckwheat when he was 3 thought it was funny to grab my phone out of my back pocket and dropped it in the 100 GL water trough, when I fished it out it had teeth marks and was waterlogged. It was dead and Buckwheat, all the time I am looking the phone over, had his lip in the air like he was laughing at me. I never bought another phone after that, just too risky with him around.”

Deb Jackson: “Am I really the only one to have it fall out of my pocket into the porta-potty? Really?”

Karina Foster: “Using it (quite accidentally) to absorb the worst of the impact from a demon pony’s kick…”

Amy Gingher Langley: “ I dropped a Trac Phone in a bucket of yucky water when I was scrubbing down the stall walls. Into a bag of rice it went and lived to tell the tale!”

Jeanne-marie Hartmayer: “Lost mine in beet pulp once, and lost it agian when I forgot about it in the trailer on the saddle rack.”

Jenna Stauder: “I have accidentally fed mine to a pasture boarded horse. Luckily, he didn’t bite or ingest it; it just got smeared with that fabulous brown drool horses create as they eat grain. I had lip and tongue marks all over it, and crusty speakers!”

Angel Martin: “Watching my colt run off with it in a 20 acre pasture, never to be seen again…the little turd!!”

Megan Kay Borgeling: “I accidentally bundled mine with some saddle pads in the washer.”

Cheryl Parsons: “Holding it between your teeth as you tighten a girth. Yep, jaw strong enough to crack the screen.”

Kristin Case: “Washed it with my bibs and then dropped its replacement in a bucket of water a week later.”

Sally McBride: “Lost in a water trough, twice. Lost, later found in the BLM land near my house, dropped in corral and retrieved after horse stepped on it, constantly drops from my pocket to the ground …”

Fiona Patterson: “Drop it in a snowbank whilst riding down the road!”

Lisa Post: “Having your horse steal it out of your back pocket & then step on it. Pretty sure on purpose.”

Linda Hartman-Maynard: “Phone in my jacket pocket, took jacket off and set aside. Later found in water trough..thanks to a mouthy horse!!”

Marie-Claude Laubier: “Mine went into the washing machine after training.”

Jennifer Kiorer Jagneaux: “Spilled hoof oil (courtesy of the barn cat). Also, I apparently love to play that fun game of, ‘I know I had it when I started to pass out hay … ‘”

Jennifer Landry: “Dropped mine in the toilet when I forgot it on my britches.”

Kathy Simmers McKay: “Put mine in a muzzle while I called for horses to come from the barn and forgot it. Hours later, I get a home phone call from Alisha …first on the list …asking why I was calling her and what was gurgling. When fatmare went to get a drink in the stream, she made the last phone calls from that phone.”

Kristen Balch: “Get fed up with it constantly freezing, hurl it to the ground and break it, then blame it on your horse stepping on it when you go to buy a new phone.”

Ashley Sclar: “I had mine in a bucket with some brushes and some treats. I turned my back and my horse’s face was is the bucket. Crunch!”

Kacee Garman: “I dropped my phone when I climbed over fencing to get to my horse. It was never heard from again …”

Allison Howson: “Dropping it in the bucket of tack cleaning water, more than once.”

Casey Smith: “I put it in my cleavage when I have no pockets, bend over to pick hooves and it falls out.”

Shannon Anderson: “My #1 has been it popping out of my back pocket when loping.”

Kurters N Pammers Amende: “Put latest iPhone in logical holder … very top of riding boot on summer trail ride to secure; but heat / humidity caused condensation so bad under phone membrane that phone did not work until air dried out … useless for anything nevertheless any emergency which was why it went to begin with. UGH!”

Kyllian Genzmer: “Horse grabbed phone from pocket while braiding and threw it out the door onto the cobblestone.”

Laura Canavan: “My mare did the ‘Mexican hat dance’ on my husband’s phone.”

Kate Showell: “Dropped mine out riding … Used track my iPhone to find it!!!!! … and my horse stood on it as I got off to pick it up.”

Krystal Kortz: “I dropped one in a bucket of black oil based fence paint, cleaned it with paint thinner and it worked for another 6 months.”

Kymbre Dwyer: “Hand jog your horse, have your phone bounce out of your jacket pocket… right under your horse’s trotting hooves.”

Jamie Bertone: “Flying out of your pocket while riding in a schooling ring at a show, never to be seen again except in the form of a very odd and new-age-looking footing made of chomped up electronic pieces — oh, I thought that was the new footing they added this year!! Ugh!”

Have more to share? Let us know in the comments! Go riding!