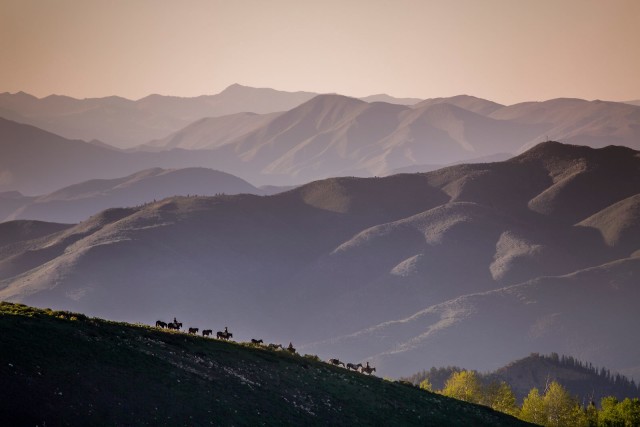 This epic tale of four men and sixteen mustangs won top festival honors in both Toronto and Telluride, and at last the wait is over: ‘Unbranded’ is playing now in select theaters and is available for iTunes download!

We’ve been following the Unbranded story for a few months, introducing the film in February and then the book in April. Since then, the documentary has premiered internationally in Toronto, premiered in the States in Telluride, won the audience choice awards at both festivals and provided a powerful voice of reason in the ongoing debates over what to do with America’s mustangs.

I was fortunate to be able to attend the world premiere at the HotDocs documentary film festival in Toronto in April. As we settled into the theater and the lights dimmed, I waited with anticipation for a story of adventure and discovery, a great triumph with a happy ending for all. Immediately, I realized that while the film is indeed about all of these things, it also encompasses much, much more.

The very first scene is Ben Thamer getting struck in the face by his mustang: it happens so quickly, the horse’s actions almost catlike in its speed. Ben is trying to remove a piece of cholla cactus that’s embedded in his horse’s muzzle, and the mustang, acting naturally in response to pain, defends itself. Meanwhile, another saddle horse takes off, bucking wildly with cholla stuck like velcro all over his flanks. It was clear to us all in the audience as the title scenes flashed over the screen that this was going to be a wild ride.

Naturally, when you take four young twentysomething guys (Ben Masters, Ben Thamer, Tom Glover and Jonny Fitzsimmons) and put them on the trail for 3,000 miles, there will be plenty of hijinks, jokes, observations on personal grooming (or lack thereof) and silliness. There will also be friction, shouting matches and near-fistfights. Add sixteen mustangs and their unique sensitivities and personalities and throw all of this onto a trail that winds purposefully into the most remote areas of the American West and you have a powerful storyline.

But there’s a bigger picture at play in Unbranded as well — interspersed with the story of the horses’ adoption and gentling and scenes from the trail, the documentary includes footage from mustang roundups and holding facilities as well as interviews with key voices on all sides of the mustang debate. The question at the heart of the film is what should be done with the wild horses: not just the thousands of mustangs overpopulating the range, slowly starving to death, but the thousands facing a life of captivity in the government holding pens, caught in limbo.

While no clear solution is obvious, Unbranded is able to walk the fine line of presenting the mustang issue in a way that honors the wild horses as an important part of western heritage that does deserve to run free, while simultaneously acknowledging that for the survival of the horses as well as the incredibly fragile western ecosystem, numbers must be limited — and our current model of roundup and adoption is simply not sustainable for long-term balance. Unbranded‘s producer Dennis Aig, executive producer Cindy Meehl, director Phillip Baribeau and producer/star/mastermind Ben Masters should be given the utmost credit for the film’s realistic look at the hard truth of the issue.

Unbranded will undoubtedly prove itself to be a valuable voice for the mustangs. As a purely visual experience, the film is perfectly breathtaking: it was easy to forget that I was in a theater in the middle of downtown Toronto on a Saturday night and not in the saddle on a remote mountain trail. From my own experiences in the Rocky Mountain west, it is extremely difficult to truly capture the scope of wide-open space, but the talented cameramen on the Unbranded crew instantly transported us to the alpine meadow, the dangerously-rocky trail, the vast and overwhelming mountain night sky. Certain sweeping scenes of mountain ranges with which I had once been intimately familiar invoked a certain tugging in my gut, like seeing the face of a long-lost friend, transporting me back to my own long days in the saddle in a way that no image ever had before.

Audiences in both Toronto and Telluride clearly agreed that Unbranded is not to be missed: the film won the Audience Choice award at both HotDocs and Telluride’s Mountainfilm. Balancing the gravitas of the plight of the mustang, as well as the encroachment of civilization on our once-wild spaces, with the often-hilarious adventures of four Texas cowboys and their wild horses on the ride of a lifetime, Unbranded is one heck of a ride.

Gravitas Ventures has acquired the North American theater rights: Unbranded is playing at select theaters now all over the country. Simultaneously, the documentary is available for purchase and download via iTunes.