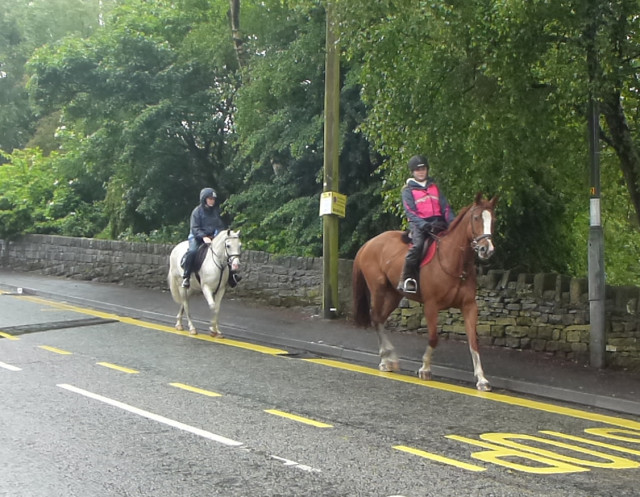 This would make passing wide and slow into law.

England might seem like a horse lover’s paradise: there are riding schools tucked away seemingly almost everywhere and many of the top names in equestrian sport hail from the United Kingdom. However, with many roadways being just wide enough for the passage of a single car, it’s also an increasingly dangerous place to be an equestrian: horror stories made headlines about horses nearly sliced in two by careless drivers, or horses being bumped by cars and falling to the pavement, throwing their riders. In a world in which fewer and fewer people seem to know how to behave around horses, riders seem to be taking their life in their hands every time they head out on a hack.

Debbie Smith would like to improve road conditions for her fellow equestrians: she’s started an online petition, which at the time of writing only needed a few hundred more e-signatures to pass. If the petition should pass, it will be passed on to local and national British government, demanding that passing horses and riders on the road wide and slow becomes a law.

While this is the first known push for legal change, it’s not the first time English riders have made efforts to try to increase awareness: we featured the Gizapaw camera/visibility vest last spring, which bears a message to drivers to slow down as well as warning them that they’re on camera. The “Slow Down For My Horse” campaign also made headlines recently, when riders removed clothing to draw attention on the roads. (Hey, nothing makes a driver double-take and slow down like Lady Godiva riding down the street.)

Posted by Slow Down For My Horse Campaign on Saturday, September 12, 2015

Despite these varied and creative efforts to encourage drivers to share the road, plenty of opposition has been voicing its opinion as well, stating that horses don’t belong on the motorways. (Legally, the roads belong to autos, horses, bicycles, motorcycles and pedestrians.) Unfortunately, in a world moving at an increasingly faster pace with a wider gulf growing between the general public and horses, there may be some truth in that school of thought. But who should compromise: the motorists who don’t know how to drive around animals, or the equestrians who have been there all along?

For more information and links to more relevant articles about sharing the roads in Great Britain, please see this Horse & Hound article.

If you’d like to sign the online petition in support of laws to protect horses on British roadways, click here. How well does your local community share the road? Let us know in the comments! Go riding!