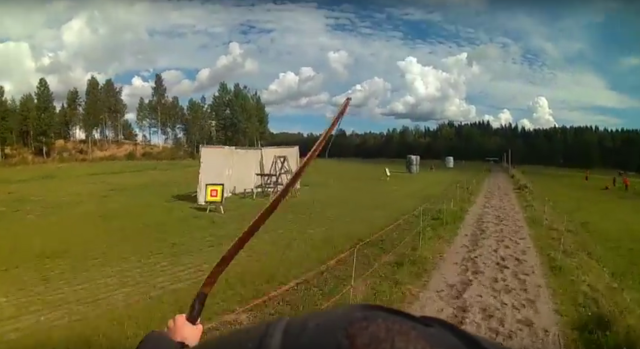 Let’s kick it old-school style with a little mounted archery for your Wednesday morning!

Now here’s an equestrian discipline that’s technically been around for centuries … but is making a comeback as an organized sport. Mounted archery has been found in the historical records since the Iron Age, though in its first form required two riders: one to guide the horse and the other to fire the bow (how’s that for challenging?) Later, the process became streamlined and refined to a single rider who both guided the horse and fired arrows. Mounted archers were found in both eastern and western Europe as well as Asia, and among the Native American populations as well.

The ancient art now survives as a competitive sport: watch from the rider’s view as a competitor charges down the lane and fires on a “Korean Triple” standard course.

Interested in trying mounted archery for yourself? Check out the “A” Company Mounted Archery website, and keep an eye out later today for a firsthand account of what it’s like to learn the art!