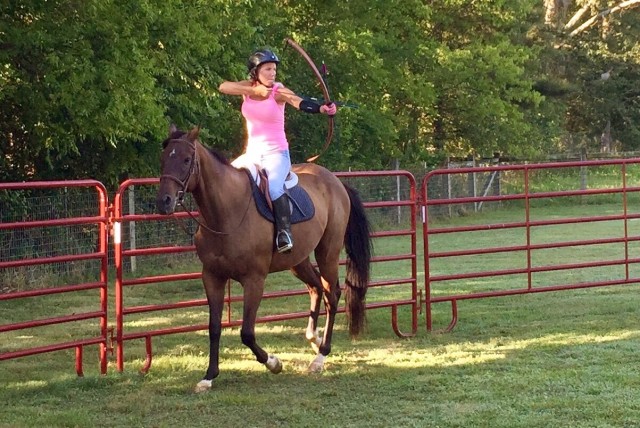 Catherine Ford has taken up an unconventional new hobby: mounted archery. She describes the learning process, both for herself and for her trusty horse Czech.

I explained what mounted archery was to my kids as I drove my oldest to archery practice, “I think this fall I’ll try Czech out with it … give him something new to do.”

Mikayla piped up from the backseat, “Oh, you mean you’re going to be just like Merida!”

As if I wasn’t already sold on the idea of combining two things I really enjoy — riding and archery — now a tiny voice put stars in my eyes and I was all in. “Yep, just like Merida.”

To get started, the first main change from target shooting is the bow. For bullseye competitions NASP shooters — what my son and I practice at home — use a bare-bones compound bow with a 10- to 20-pound draw. Mounted archery, however, must use a naked composite recurve that has no arrow shelf and of course no mechanical trigger, with a 30- to 45-pound draw.

Nocking the arrow is said to be the hardest part: it needs to happen quickly and precisely so you can hit as many targets as fast as possible. Feather fletching is used on the arrows instead of plastic for the same reason: when arrow nocking, you can’t take the time to look if your odd color is towards you with plastic vaning.

I’ve had experience with a recurve; my mother’s was the first one I learned to shoot. Unfortunately, it’s too long to use mounted, but great for basic practice on the ground. The quiver also changes from a cylinder on your side (ground) versus a flat one strapped to your leg with the arrows side by side (mounted).

The next hurdle is my horse. I needed to drop the reins on my OTTB who has a history of leaning heavily on the bit and going faster than needed … this should be interesting.

I made a checklist to keep up with our progress:

1. Shoot with a 35-pound draw from the ground: I can mark this one off the list already.

2. Shoot from the ground holding an arrow in the bow hand. Easier than I expected, the extra arrows in the bow hand aren’t difficult if you are already gripping the bow properly. I had a little learning curve shooting sans arrow rest (not allowed in mounted competition) and lost some skin on my hand in the process before I got just the right angle on the bow.

3. Shoot from the ground in motion (walking.) I confess, I shot a few trees and the neighbors’ yard once, but it also came pretty easily after a few nights’ practice.

4. Get Czech used to the bow from the ground, then mounted. For this step, I had help on the ground in case he bolted and to help me juggle equipment. Mounting with a bow is not a skill I’ve figured out yet. At a standstill, I raised my bow after I practiced bumping him with it a few times; he wasn’t thrilled or disgusted so we moved on.

5. Have Czech stand calmly nearby while I shoot target from the ground. I was prepared for him to spook at the sight of the target itself in his pasture, so we spent a few days with that. Then I awkwardly held a lead rope with Czech behind me a few steps as I loaded the bow to let one fly. The target made its trademark POP and my sweet horse barely batted an eye.

6. Shoot from the horse. With a ground helper in case an arrow went onto the round pen track, I got on my trusty steed. At a standstill, I did what all riding teachers everywhere tell you never to do and dropped my reins. Bow raised, the arrow cracked into the target with a pop. Czech did not care one bit.

7. Shoot at a walk. Easy peasy. Let the target come to you and loose it!

8. Shoot at the trot. Lucky me, Czech has a trot I can sit easily and in the round pen I was totally comfortable letting my reins go.

9. Shoot at the canter. Houston, we have a problem.

Okay, sure, my horse was a rock star and I was all Katniss on his back hitting the mark, until we went into the arena. Being the well-trained horse I’ve ridden consistently for two years, when I put Czech on a straight line to pass a haybale target, the second I turned my head and my upper body to aim my good horse also turned — exactly as he’d been trained all this time.

When I asked for a canter things went even worse as I raised the bow and he went into “I remember being a racehorse” mode, looking at the bow like a cocked whip.

We stopped here for a week and spent each day training on a slack rein, neck reining and stopping on the slightest pressure when I lifted the reins from his neck: very different from what my constant-contact horse was used to. He got the idea, supported himself better than he ever has, and my seat and leg improved!

Once I added the bow back in, it was old hat and he did amazing. I have read that some prefer to sit the canter deep to shoot, loosing on the upswing, and others hold a half seat to keep their upper body still as they aim. I’ve gone between the two styles for now.

10. Nocking the next arrow quickly to shoot multiple targets. This is our next goal and a difficult one, I’ve found.

11. Having a horse that’s calm in the alley as other horses leave to canter their lane to shoot at competitions. To be determined…

If you enjoy shooting off the ground you’re going to love it from a horse. It’s almost a zenlike state to zero in on your horse’s movement as you aim, letting go of control over the actual horse itself. Four weeks in, I’m glad I took the steps to start a new adventure with my buddy — we’ll see where it takes us.

Is it “Your Turn”? We love sharing reader stories — email them to [email protected]

About Catherine: I rode 3-day when I was younger until a bad fall broke my back and I gave up riding for 15 years. As an adult I came back into horses with my five very young children (including a set of triplets) in tow and immediately fell in love with the Off-Track Thoroughbred. Our small family farm is home to two OTTBs that I do hunter jumpers with and one Welsh pony that my children are learning to ride.