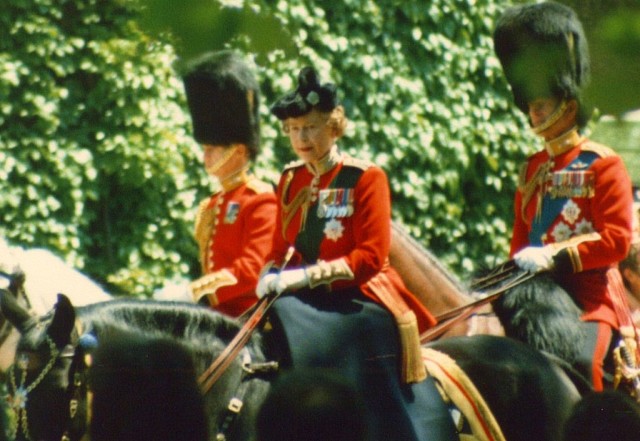 In honor of Queen Elizabeth II becoming the UK’s longest-reigning monarch, we’re taking a look at one of her most iconic and beloved riding horses, Burmese.

It’s no secret that Queen Elizabeth II is a lifelong, passionate horsewoman: she’s been ranked among the top breeders of bloodstock in the UK though she owns just a modest small string of racehorses and we’ve all seen and loved photos of the Queen out for a hack on an impeccably-groomed and oh-so-hairy pony — both in her childhood and in recent years. She’s been recognized by the FEI with a Lifetime Achievement Award for her dedication to the horse. And yesterday, this equestrian monarch celebrated a major achievement in becoming the longest-reigning monarch in the history of the United Kingdom: she’s held her throne for 63 years, surpassing Queen Victoria who previously held the record.

In honor of the Queen’s great milestone and her service as one of the highest-profile horseback riding devotees in the world, we’re saluting one of her most recognizable horses, the mare Burmese.

A striking black mare, Burmese was bred to be part of the Royal Canadian Mounted Police (RCMP) and was born in 1962 in Saskatchewan. The mare quickly became a favorite among RCMP recruits, who rode her for equitation practice, and by age five Burmese was the lead horse for the RCMP’s famous Musical Ride. The Musical Ride was preparing to perform at the 1969 Royal Windsor Horse Show in England when they learned that Queen Elizabeth was looking for a new riding horse. The RCMP offered their star mare to the Queen, who graciously accepted. Burmese was then carefully trained by Corporal Fred Rasmussen and presented to the Queen formally in April of 1969.

Queen Elizabeth not only rode Burmese for recreation — the Queen was reported to ride daily when she was at her country houses, no matter the weather — but also for ceremonial displays as well. In full parade regalia, the Queen aside her beautiful tall black horse were an inspiring sight.

Both the Queen’s horsemanship and Burmese’s courage were tested in a famous incident at one such ceremonial ride: on June 13, 1981 at the Trooping of the Color, the Queen and Burmese were leading the parade through the streets of London when a teenager in the crowd fired six blanks at the monarch. Burmese started visibly (as would most horses!) but Queen Elizabeth quickly got the mare back under control and carried on, patting her shoulder to reassure the horse.

This video from the incident shows Queen Elizabeth quickly steadying her horse — while the Queen looks shaken by the events, it’s also amazing to see her rock-steady equitation in a sidesaddle.

The Queen continued to ride Burmese for ceremonial occasions despite this frightening moment. A famous photograph depicts the Queen and US President Reagan out on a hack during the president’s state visit in 1982. Reagan was mounted on another horse that was part of the RCMP’s equine gift.

Burmese was retired from riding in 1987, after serving the Queen as a riding mount as well as a ceremonial mount for 18 straight appearances at the Trooping of the Color. Strict orders were given that Burmese was not to be ridden by anyone; she was turned out to pasture at Windsor Castle in a location where Queen Elizabeth could see her on her visits. At the age of 28 in 1990, Burmese passed away and was buried on the grounds of Windsor — an unusual honor.

To commemorate her beloved partner, the Queen commissioned a bronze statue of herself aside Burmese; the statue was revealed in 2005 in front of the Saskatchewan Legislative Building in Regina, Canada, the province where Burmese was born. Through the statue, the RCMP’s royal gift was honored and the image of the Queen’s beloved black mare was able to live on.