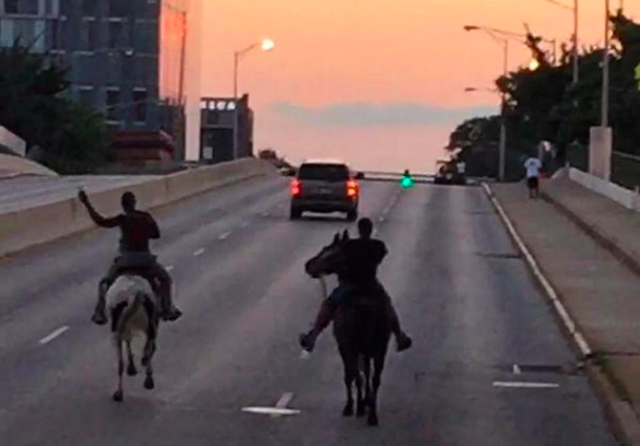 … and everyone is losing their minds about it. Are the horses stolen? Are the riders protesting something? Does it even matter?

When people think of horses in Baltimore, they may first think of the arabbers and their horse-drawn produce wagons, who made headlines last winter when a number of horses were seized by animal control. This time, however, it was a gang of riders cantering down busy city streets that drew the public eye on Saturday, August 23 (videos of which promptly went viral on social media.)

Personally, I’m not sure that the busy streets of Baltimore are the safest place for either horse or rider to be going out for a jaunt (you could be smashed by cars! Also, soft tissue damage from pounding over asphalt at speed.) Regardless of the fairly obvious safety hazards, however, city officials are not pleased:

Okay, I have to assume that city officials have information that the media does not: how else would they assume that the horses were stolen from the arabbers, or that the timing of the ride with the shut-down dirtbike gathering was anything but coincidence? Then, of course, there’s the actually worrying analysis of the horses’ emotional wants and needs, which in my opinion is something that should be done by horse owners and handlers and not city officials (next stop: no one is allowed to ride horses anymore, period.)

So we’ll assume that city officials have other sources for their information. Maybe this really was more than a bunch of guys who just wanted to go for a ride through the city.

Of note is that it’s illegal to ride a horse through Baltimore unless you are carrying a permit to exhibit horses or you are a licensed arabber. You also must be over the age of 18, have no prior convictions of animal cruelty, and be deemed able to handle the horse in a human fashion. The horse must have an annual vet exam, cannot be ridden in extreme heat or cold, or be ridden by an individual who is drunk. Even after obtaining the license, a rider then needs to acquire the city’s permission. (I’m totally on board with all of this for the horses’ sake as well as the general public.)

The bottom line: Go riding. But maybe don’t gallop your horse through the streets of Baltimore.