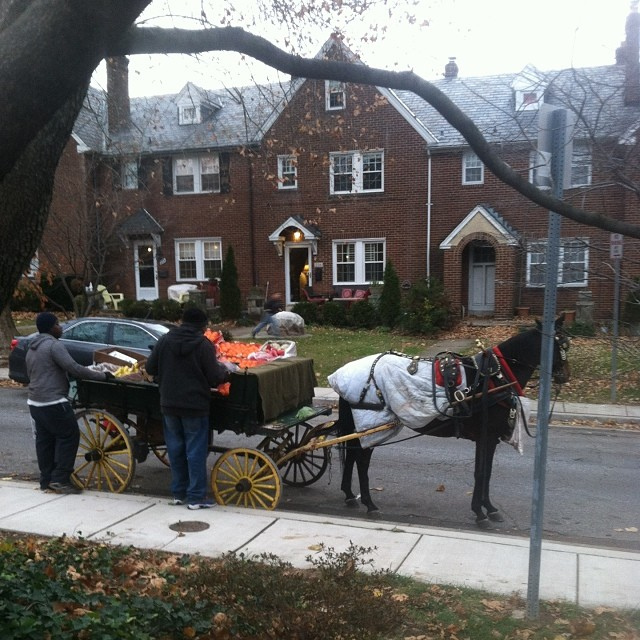 The days of Baltimore’s horse-drawn fruit cart vendors may be numbered.

This week, fourteen horses, a pig, a goat and two chickens at a stable used by Baltimore arabbers were seized by Animal Control and sent to Day’s End Farm Horse Rescue in Lisbon, MD. DEFHR often assists the state of Maryland with abuse and neglect cases, so (unfortunately) this is not too out of the ordinary for them.

What makes the case unusual, though, is that it could mark the end of an era in Baltimore.

The name “arabber” (pronounced AY-rabber) comes from the less-than-PC 19th-century slang “street a-rab,” which referred to homeless children on the streets. Since the 1800s, though, cities along the East Coast have known arabbers as fruit vendors who went door-to-door on colorful horse-drawn carts, advertising their wares with jazzy jingles. They were once a common sight, but only a few in Baltimore remain.

According to TheHorse.com, DEFHR executive director Erin Ochoa noted, “DEFHR has a long history in helping Baltimore city and the arabber community to ensure quality care for their horses.”

Translation? This is not the first time horse rescues and animal control have had to intervene in the care of arabber horses. DEFHR has previously tried to educate the arabber community on the need for proper farrier and vet care, as well as steered them away from antiquated practices like giving beer for colic.

However, due to possible legal action, few details are available as to exactly what type of abuse or neglect occurred, and what the condition the horses were in. Officials cited concerns about the condition of the barn on South Carlton Street, lack of access to water for the horses, and the horses’ ability to cope with cold temperatures, but barn owner William Murray, Jr. contested those claims.

One might suspect that the move to drive horses out of Baltimore and cities in general is motivated by urban development.  That’s possible, I suppose–but from my own experience with Day’s End Farm and other horse rescues in Maryland, I have never seen a horse seized from its owner without a good reason. As in similar animal seizure situations, DEFHR is the caregiver for the horses while legal proceedings are underway, and thus is limited in the comments they are allowed to make about the case.

It’s hard to know what to feel about the seemingly inevitable end of the arabber carts. Do we mourn the slow death of a vibrant piece of Baltimore’s culture? Or do we accept the end of a business that has refused to keep up with modern horsekeeping?