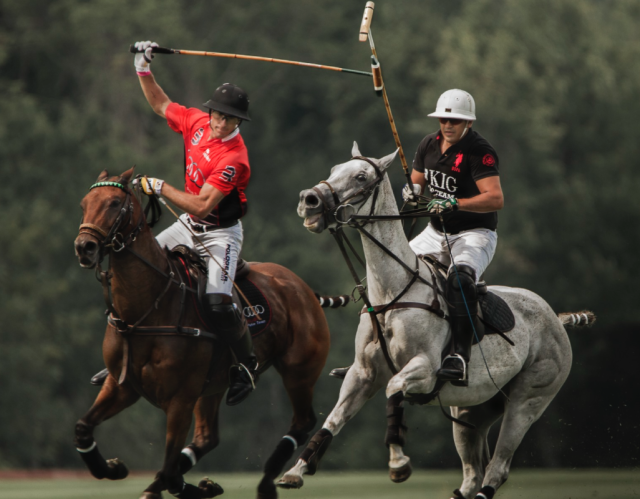 We catch up with Nic Roldan’s East Coast Open ticket winners after they attended Sunday polo in Greenwich.

Sunday marked the first public match of the USPA East Coast Open and was without a doubt a crowd pleaser. Audi’s Miguel Novillo Astrada, Nic Roldan, Juancito Bollini and Marc Ganzi reigned victorious over Team KIG with a final score of 11-6. Nic Roldan, with a total of 6 points, was named Most Valuable Player.

Here’s all the details from contest winner, Colleen.

After a long Saturday of teaching and riding, it was such a pleasant surprise to log into Facebook that night and find out that I won! Sunday morning, my friend Emily Staley and I met at our friend Stephen Cugliari’s house before heading down to Greenwich. Since this was such a last minute excursion, none of us were prepared with a cooler so we decided to be creative and improvise. We headed to Home Depot to grab some supplies to turn a porsche 911 “frunk” into a cooler. We then headed to Greenwich Polo Club where we had a blast! The weather was gorgeous and we had a tough time deciding what to grab for lunch. There were so many delicious options available! The polo game was so exciting and it was thrilling to be so close to so much horse power, including both the polo ponies and the Audi tent. All three of us being car enthusiasts, we decided to wander over to the Audi tent to check out some of the cars also. We couldn’t have asked for a better Sunday afternoon and look forward to going back again soon!

Colleen is a trainer with students focusing in Equitation, Hunters and Jumpers. She has a young prospect that she is aiming for the young jumper classes next year! Good luck and thank you for the report, Colleen!

The second contest winner posted this gorgeous photo to Instagram.

Ready. Set. #Goal !!! So excited for the start of #polo #PoloAudi #greenwichpolo such a beautiful day and many thanks to @nicroldan and @greenwichpoloclub

Great to see one of the competition winners today having such a blast at @GreenwichPolo priscilla_godsoe’s photo https://t.co/4UaPdZNTPM

This upcoming Sunday, August 30th, Nic has made a partnership with the United States Pony Club and the USPA I/I for discounted entry for kids, juniors and college students. The special discounted rate of $20 per car can be purchased at ThunderTix or by simply shouting #TeamNR at the gate!

Nic will be roaming the crowd Sunday, so be sure to wear your USPA I/I and Pony Club badges, shirts and hats!

As always, you can also watch live at Chukker.TV.