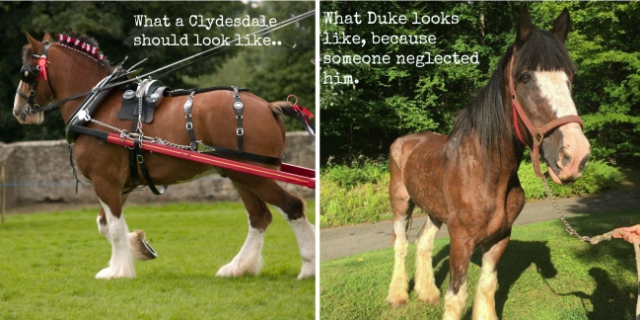 After a former Budweiser Clydesdale was rescued from New Holland, the question remains: can you ever truly know what happens after a horse is sold?

Photo via the Connecticut Draft Horse Rescue on Facebook.

His name is Duke, and once upon a time he enjoyed a stream of adoring visitors at Busch Gardens in Williamsburg, Virginia. In those happier days, he was a Budweiser Clydesdale, cared for with the utmost attention and respect.

Then, he changed hands and ended up in the auction pen at New Holland, a place that induces a sinking of the heart when mentioned. Hundreds of pounds underweight, missing patches of hair, infested with mites and in need of years’ worth of love and attention, Duke was bailed from New Holland by the Connecticut Draft Horse Rescue.

According to the communication between the head of Clydesdale management at Anheuser Busch, the Connecticut Draft Horse Rescue confirmed that Duke was sold in 2009 with a contract including a right of first refusal. From there, the trail is hazy, but it’s evident that Duke fell into the wrong hands along the way.

Happily, Duke is doing much better and is enjoying life as he recovers from the neglect he experienced. The look in his eye is bright and kind, as if he still believes in the good life that can be provided by his human handlers.

For those wondering, Anheuser Busch has made donations towards the care of Duke — and did so before the identity of the gelding was confirmed. While we wish that these circumstances had been avoided, the fact is that many contracts are often broken, and Duke sadly suffered the consequences. However, we’d like to also thank Anheuser Busch for working with the CDHR and the care of Duke in his new home.

Fortunately for this particular situation, Duke was microchipped. It was the microchip that confirmed he was indeed a former Budweiser Clydesdale.

While microchipping your cat or dog may be common practice, many do not know that the chips are also available for horses. The chip can be implanted in a quick process that will place it in the horse’s nuchal ligament. Most of the microchips are guaranteed for life and are easily scanned if a solid identification were needed.

This service provides both peace of mind and protection for both yourself and your horses. We know there are too many shady people out there to count, and we’ve all heard horror stories about horses getting into the wrong hands and becoming “John Does” without a proper identification.

Don’t let this sort of situation happen to your horse. It’s far too easy for a contract to go unhonored or for a dishonest person to pull the wool over our eyes. As horse owners, we all need to do our due diligence if the need arises to sell or rehome our horses. Do your research, hold up your end of the bargain, and do everything you can to ensure your horse lives a safe and healthy life.

We’ve reached out to the Connecticut Draft Horse Rescue for an interview, so we will provide updates on Duke’s recovery process as they are made available. In the meantime, check out the CDHR Facebook page for more information on how you can help.