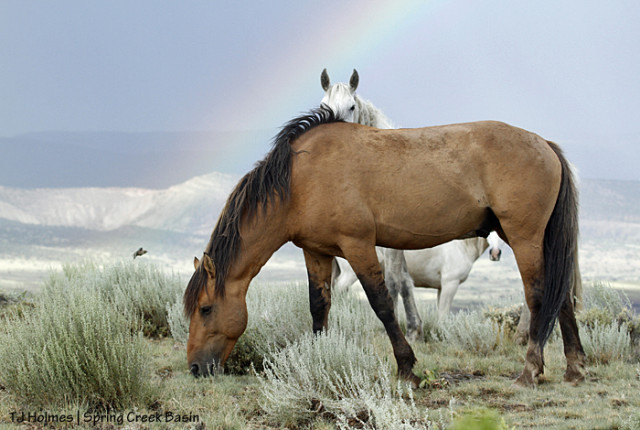 What’s it like to live and work among the mustangs? We caught up with TJ Holmes, a volunteer who documents and darts mustangs with PZP for the Bureau of Land Management.

Hollywood, Alegre and Houdini (barely seen in back) under a rainbow in Spring Creek Basin. Photo by TJ Holmes.

TJ Holmes is a volunteer through the Bureau of Land Management to document and dart mustangs in Spring Creek Basin, Colorado, using the PZP vaccine as a method of population control rather than roundup and removal. (If you missed our interview with Dr. Jay Kirkpatrick about PZP and how it could change the face of mustang management, you can read that here.) We caught up with TJ to learn more about what she does.

There are plenty of mustang fans who believe that the horses should run wild on the range without any human interference, but I’m sure in your experience you see a bigger picture. Tell us more about the Spring Creek Basin mustangs.

What’s your defined role with the BLM in terms of management?

I have a volunteer agreement with BLM in order to dart with PZP and do other volunteer work in Spring Creek Basin. I’m on the board of the Colorado chapter of the National Mustang Association (NMA/CO), and I’m a representative to our local coalition group Disappointment Wild Bunch Partners, which is made up of representatives from NMA/C, Four Corners Back Country Horsemen and Mesa Verde Back Country Horsemen — all Southwest (or southwestern) Colorado groups. In that group, I represent the horses themselves.

After the 2007 roundup in Spring Creek Basin (which I attended in an official capacity as a newspaper reporter/editor) I visited a couple of other herds: Little Book Cliffs Wild Horse Range in Colorado and Pryor Mountain Wild Horse Range in Wyoming and Montana. From advocates in those places, I learned about the importance of herd documentation to management (BLM needs to know what and how many it is managing,) about PZP fertility control and about bait trapping versus helicopter-driven roundups. To get PZP and bait trapping for Spring Creek Basin’s mustangs, I started documenting the herd immediately after the 2007 roundup.

How many mustangs live in Spring Creek Basin Management Area? How many is the area intended to support?

Spring Creek Basin (Spring Creek and its tributary arroyos drain Spring Creek Basin; the horses are in the basin 24/7/365; they’re rarely in the almost-always dry “creek” arroyo) has about 60 mustangs right now. The AML, or appropriate management level, is 65. That doesn’t necessarily mean that BLM will initiate a roundup when the population reaches 66. We’ve had just two foals this year with the use of PZP; that means we’ve achieved our goal of slowing population growth. If we can keep our foal crops low (with the use of PZP,) our next roundup potentially will be a few years away — and it has been four years already since our last one in 2011.

What else is living on the range in Spring Creek Basin?

So there’s no public livestock grazing or other commercial interests in the basin?

Until this year, yes, there was a cattle-grazing allotment within Spring Creek Basin. The resource management plan BLM signed in February includes the provision that when the permittee relinquishes the permit, BLM will retire it. This is in the works, but it’s basically a done deal. As BLM says, it “reduces conflicts.” Which is awesome for the horses!

Did the BLM have a birth-control plan in place for the Spring Creek Basin and just needed the right people (such as yourself) or was it through your volunteer efforts that they were able to start focusing their attentions there?

When BLM wrote the gather environmental assessment (EA) for the 2011 roundup, it included a provision to implement a PZP program for the Spring Creek Basin herd. In 2010, we had different managers. Having started to learn specifics about PZP from Dr. Jay Kirkpatrick at the Science and Conservation Center, I wrote a PZP proposal that our groups submitted to BLM that May to ask those managers to use native PZP in Spring Creek Basin (they had used PZP-22 on the released mares during the 2007 roundup.) Despite the fact that, based on BLM’s own numbers, I figured the use of native PZP would save this office about $2 million over a decade, BLM initially said “thanks, but no thanks.” Uh … huh?! Hoping for change, I attended training with Dr. Jay in the summer of 2010. We got change in the form of new BLM managers at various levels in our local office, and that meant getting BLM people who were willing to use PZP, thank goodness. The proof is in the pudding — and the last three foal crops.

Can you explain for readers’ sake the pros and cons of population control vs. roundups vs. no control whatsoever?

People want to leave the horses alone. That would be great — if they really were free-roaming and fences didn’t exist. On one hand, BLM has a responsibility to manage the range — for livestock, yes, for wild horses, yes, for wildlife, also yes. And if you don’t have that range — that grass — what do you have? A desert. We ARE high desert, which means our range, like most ranges where wild horses are found, is fragile. We’re not talking about Kentucky bluegrass out here. If turning this into a desert that cannot sustain wildlife is the price of leaving the horses alone, I don’t want any part of it — and neither does any other logical mustang advocate. Balance is required.

I like to say BLM doesn’t have the “overpopulation problem” it complains about; it has a reproduction issue. BLM is the largest breeder of horses on the planet — think about it. If we — they — would start at the reproduction end, they’d do the horses and themselves a huge favor. Simply removing horses, then allowing the rest to reproduce at normal or increased rates (compensatory reproduction: mares and fillies breed younger, and more fillies are born in years after roundups — I’ve seen both of these) isn’t sustainable, clearly. However, permanent sterilization is not in the horses’ best interests – or in the interests of the American (and other) people who love them and want to always see them on the lands they have roamed for centuries. With PZP, we’re seeking to slow reproduction, not stop it entirely.

What do you do when you’re documenting? Photography, written description…

Both. At this point, I know the horses so well by sight that I can ID them from miles away. Documentation now basically consists of recording new foal births and mortalities. My own “documentation” is simply the joy of being with the horses and seeing what they do, where they go, what they eat, when they drink, how they interact and behave with each other. Horses are endlessly fascinating to me, wild horses even more so. People have said, “Well, I’ve been out to see the wild horses; I don’t need to see them again.” I DO need to see them again … and again and again! It never gets old to see them, be with them, learn from them. “Documentation” now consists as much of the feeling of being with them as much as ticking boxes of who’s with whom.

Talk us through the darting process in a day’s work.

Depending on who needs primer doses and who needs booster doses, that determines when in the year I start darting. Primer girls get darted in late winter — to give me time to get them with the boosters before early to mid-April, which is generally when our foaling season starts in Spring Creek Basin. Again, I want to get them before they foal and conceive again – plus, it’s easier to get close to them and dart before they have a brand-new baby to protect.

So depending on the mares I’m after, I drive into the main part of the basin to look for horses, or I hike in (this is dependent on what I already know about the horses’ locations.) When I spot a target mare, I mix the adjuvant and PZP to make up a dart, then hike out to the mare. Sometimes, they’re not far … sometimes, they’re fairly far. And then it’s a matter of hanging out with them long enough to take a good shot. PZP is not to be wasted, and I don’t want the experience to be at all traumatic for the mare or band.

I have been hanging out regularly with these horses since 2007 and visiting since 2002, which has come in handy when getting close enough to them to dart. Some of the mares do get wary. But I’ve also been able to dart mares that I didn’t think I’d be able to get close enough to. For people who think mares get impossible to dart after they’ve been darted, I refer you to the Assateague Island program, in place for 30 years, the Little Book Cliffs program, in place for a decade or so … or to some of the visitors with me to Spring Creek Basin, who enjoy beautiful visits with our horses, including mares that have been darted.

So overall, the PZP program is benefiting your herd.

We’ve already prevented a roundup four years after the previous one in 2011, and it looks like we won’t need one for at least a few more years. We submitted a bait-trapping proposal to BLM earlier this year, which resulted in a scoping period during which several thousand positive comments were received. So we’re on the right track there, too. Education about PZP will conquer the myths and – hopefully – preserve our mustangs.