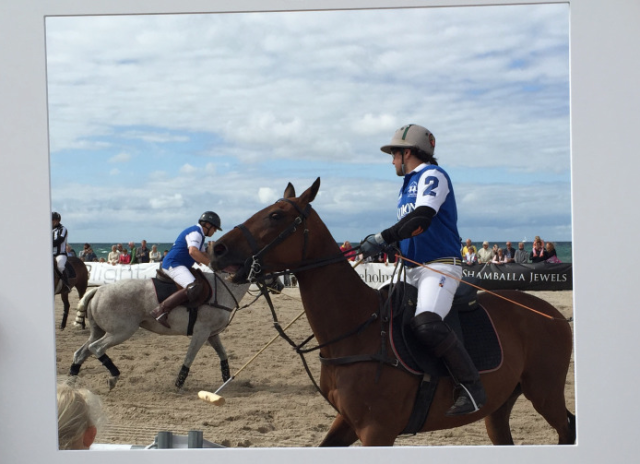 Everything’s better on the beach.

Beach polo has come to Denmark with a bang! Polo enthusiasts and curious crowds made their way to one of the most beautiful and famous beaches in Denmark, the picturesque Hormbæk beach in North Sealand for the inaugural Scandinavian Beach Polo World Cup.

The event was kick-started with a Players’ Dinner at Havreholm Slot, where a champagne reception was in place followed by a mouth-watering and summery menu of barbecue and the best part was the dessert (yes I took two). I already knew a few of the players, but it was great to meet everyone before all the action next day.

As Thursday the 23rd rolled in, an amazing VIP tent had been set up inviting up to 300 guests per day to enjoy Veuve Clicquot champagne paired with decadent Rossini Caviar followed by lunch and lots of polo action!

Eight teams from around the world competed for the coveted trophy in some tight battles on the sand field. Spectators came in by the thousands to see what polo is about and this especially warmed my little polo-heart. It was amazing to see how the local community was so extremely welcoming and interested in the sport. At any given match the sidelines were full of spectators, as apart from the VIP tent the event was open for all to see.

A few months ago I became part of the team organizing the event as I know Jacob and Louise very well and offered to help out with anything I could (which ended up being many things, but more on that later). I was thrilled to be able to help and I wanted to be as hands on as possible. It was truly amazing to see this event come together and knowing that it was a success is an extraordinary feeling.

The event was a three day affair and although the weather forecast kept telling us a storm was on the way, we were lucky and only got a little drizzle on the last day. My two best friends and ultimate polo buddies, Sophie and Cecilie, were there with me as well and we managed to catch up a little between polo matches and hashtag frames. And we got to drive around in some pretty awesome cars, made available to the #ScandiBeachPolo team by our sponsors Land Rover and Jaguar.

One of our drives was from Hornbæk to Copenhagen for an early morning interview on one of the very popular morning radio shows. I must admit I was a little nervous as it was live, but then again I could talk about polo in my sleep (which is sort of what happened), Danish speakers can hear it here right after “Not Letting Go” and again after “Womanizer”

Then it was time to get back to Hornbæk for Ladies’ Day. One of my jobs during the event was to find the ‘Best Dressed Lady’ sponsored by Hildon. I walked around with Cecilie for a while spotting and debating different outfits and finally found one which in my opinion was ‘polo perfect’. Only after I saw the pictures did I realize that the lady was actually wearing an outfit VERY similar to mine, haha. I wonder if everyone else thought about that as well…

Another fun assignment I had (well actually it was my idea) was to do a throw-in from the sidelines, through the hashtag frame we had. It was really fun, but I definitely need to practice my throw.

The Rossini Caviar Dash was a great activity between matches and it was hilarious to watch everyone race from one end of the field to the other to grab the bag with a tub of fine caviar worth 500£ and there were a few falls, tackles and leaps along the way.

Aside from the fun times on the sidelines there was also plenty to see within the sideboards. With so many good players out there it is hard to concentrate on only a few and even more dificcult to choose a team to root for.

The young Brits Tom Harris, Stevie McCraith and George Pearson, who is also half Danish, showed natural polo talent and the show-jumpers turned polo players like Daniel Zetterman and Jesper Brunander showed excellent horsemanship resulting in polo matches full of grace, power and lots of action to really satisfy the many spectators curious to see what polo is all about.

Fede Boudou showed some superior skills and I am pretty certain he could have won the entire tournament on his own by just juggling the ball in the air tapping it along as he likes to do. His team mate and patron Flemming Viktor also scored a few nice goals and did some great plays and blocked his opponent and fellow Danish polo player Christian Mellentin. The combination of skills in this dynamic duo was what gave them the trophy in the end with a 10-2 victory.

It was great to watch Roy Prisk play and show his flair as he is my polo teacher at The Berkshire and also my friend.

After 12 intense matches there was a winner, e3light Team New York and the famous Danish show-jumper Tina Lund did the honors of handing over the trophies.

At the end of those very hectic days it was time to have Matteo open up a bottle of Veuve and enjoy some bubbly.

Those three days went by in a flash and I wish I could turn back time and do it all again, but I will just start looking forward to next year instead.

Thanks for sharing, Diana! Be sure and check out how Diana fell in love with polo and discover much more on Diana’s website, Facebook and Twitter.