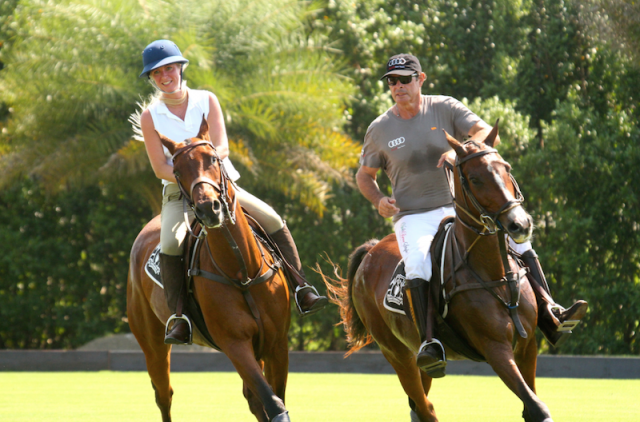 She fell in love with polo on a trip to Buenos Aires in 2010, but it would be five long years before she realized her dream of taking lessons. She began her journey at the Dilmun Club in Bahrain, taking basic horsemanship lessons. She recalls, “Even though I looked and felt a little ridiculous I wasn’t going to let that stop me.”

“Anything that puts such a big smile on my face is worth doing more of.” –Diana

Within weeks, she was on a plane and headed to the US Open Polo Championship held in Wellington, Florida. Before the trip, she watched all 16 games leading up to the final match via Chukker.TV because she’s #dedicated. But the spectacle of the Open only increased her desire to play, so next she drove straight to Grand Champions Polo Club for lessons.

Here’s the whole story from Diana:

I had reached out to the Grand Champions Polo Club, as I had been there (on the sidelines) in the fall and I really liked the club and the atmosphere there. They were all very welcoming and excellent hosts! I had the pleasure of meeting Melissa Ganzi, who owns the club with her husband Marc Ganzi, and she is so passionate about polo it is truly inspiring, not only does she play very well and participates in many big and small tournaments but she also works hard on several boards promoting polo and getting more people involved even from a young age, both of her children Grant and Riley play polo as well.

The day finally came; I was going to have my polo lesson and I was so excited. We arrived at the Grand Champions Club in the afternoon. It had been raining earlier so the smell of raindrops and wet grass was still lingering in the air and there were little pearls of water hanging on the bushes, but the sun was peeping out between the clouds adding to the magical feeling I already had inside.

At the stables my friend and I immediately went to say hello and pet the horses. This is to me the funniest part of this journey I am on, as I had never really liked horses before polo. I always thought they were beautiful, but at a distance or in photographs. I was not really one to go and touch a horse, but now I love them, I pet and hug them and I feel a connection with the horse I am riding.

Making new friends in the stables.

After petting all of the horses, my horse was brought to me all ready with her tail braided and all, a beautiful chestnut colored mare named Daphne. She was so sweet and calm and I felt very safe on her, but I was anyways just eager to get out there and get going.

Daphne, Juan and I preparing for my lesson.

The great Juan Bollini was my teacher and he really is great, I have seen him play and it’s obvious the man has skills and experience, but he is also a good teacher. He immediately understood that he needed to push me a little and not let me make excuses or ramble on about other things. He said he was impressed as he knew how little experience I had. I think he just said that to be nice. But to be honest I kind of impressed and surprised myself, especially looking back now after my three lessons.

My third lesson, confidently and happily cantering around with Juan. Photo by www.thepolopaparazzi.com

The first lesson we were “just” riding around in a large paddock, he was correcting my riding position and teaching me how polo riding is so different to the style I had been learning in Bahrain. There is a lot more movement in polo. For example, in Bahrain I had learned to turn only using my thighs, while still keeping the lower part of my legs in place and my upper body as well. In polo you turn with your entire body and legs in a very different way. My legs also had to be positioned slightly more forward than what I had been taught so far and the reins were in one hand only, which was also an adjustment, mostly because my right arm didn’t know where to go. I wasn’t holding a mallet yet, so it was just there feeling awkward and dangling along, it helped to hold the end of the reins, or sometimes I just “held” on to my own leg or hip or the saddle.

My third lesson, trying to prevent my arm from flapping around. Photo by www.thepolopaparazzi.com.

Another very new thing to me was riding so closely to someone else. Juan was on his own horse right beside me and at times our horses would be completely up against each other and our legs were being squashed a little in between. It didn’t hurt, but I remember being a little anxious about it at first, fearing that it would hurt or something would happen, but I just told myself that having your leg squooshed is part of playing polo and then I was really happy, ’cause it meant I was heading in the direction of being able to play polo. It was also very helpful to have Juan right there beside me as he could quickly correct me, he could show me how he was doing it and at times he would help me get my horse up in gear (you know, when my own horse-steering-skills weren’t quite adequate).

At my second lesson I got a mallet in my hand, first a foot mallet to practice the swing and shot, then a 53-inch stick on top of a horse. We again practiced standing still, then gradually I did it walking and trotting and finally cantering, but I would subconsciously pull back the reins and slow Daphne down when getting close to the ball. I hit the ball most of the times, and when I didn’t Juan was right behind me and shot it forward for me. It was an amazing feeling actually hitting the ball and it was also incredible how into the game the horse was. Every time she heard the mallet hit that little ball I could feel her tense a little and speed up and she would go the direction of the ball without me even telling her to. We did a good 20 minutes of that and then my arm of course got quite tired, so we went over to practicing riding again, more cantering this time and it felt amazing! We were on a field so there was lots of space to just gallop freely and it was actually the first time I had done that, so the butterflies in my stomach were going crazy and I had the biggest smile on my face, it was truly a spectacular feeling.

Practicing my swing with a foot mallet. I got a custom made one from Tatos mallets after, it has pink tips and my initials on it.

Hitting the ball in trot.

Hanging out with Juan in the team tent after my lesson.

The third lesson was more of what we had done the second time and it was awesome. I felt like I was getting the hang of it a little bit more. Sean, a fellow polo learner, was having a lesson simultaneously. It was fun to see another beginner learn, although he had had more lessons than I have, so he was a lot better than me. Juan made us race against each other hitting the balls down the field. Needless to say Sean won, even though Juan was helping me out a bit, but it was so much fun and during our little races I kind of felt like I was playing — OK, maybe not playing, but I felt the energy rushing through my body. I guess the competition made it even more exciting and sparked a feeling of exhilaration inside of me. And the fact that I was actually doing something that I have dreamed of for so long and almost thought wasn’t possible, this gave me a great sense of accomplishment and pride.

Hitting balls down the field racing against Sean. Photo by www.thepolopaparazzi.com.

Practicing a little before starting and my leg positioning is not very polo like. I need to get them more forward. Photo by www.thepolopaparazzi.com.

Conclusion of my three beginner lessons is that polo is even more amazing to me than before and I can’t wait for my next polo lessons, which will probably be in London as I am planning on going there at the end of May.

To follow Diana on her polo journey check out Polo, People and Places.

For more great photos head over to The Polo Paparazzi.