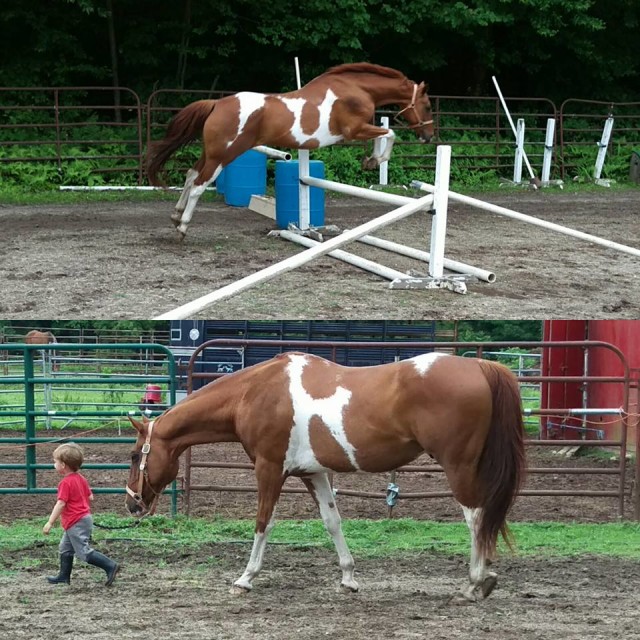 This week’s Absorbine 24-Hour Photo Challenge was inspired by the response to Monday’s popular story about Da Vinci, the foal born with markings that look like another horse galloping over his left shoulder and neck. So many readers started sharing their own curiously-marked horses that we thought we’d turn it into a photo challenge! Here are the most unique and symbolic markings in Horse Nation.

Jessica Bailey: “My fella kind of has a horse head silhouette above his left shoulder.”

#horsenation You know how in glee Britney says that a unicorn grows a horn when it does a good deed until it forgets it’s magical and then it’s horn falls off? Well I think that’s what Mercedes’ dot on her face is: her unicorn horn spot from when she does a good deed, which she does everyday when I ride her <3

Jill Zerkowski: “I see the Hulk in the markings on her hind end! #supermare”

In the winter, my horse’s snip looks like a teardrop, but in the summer, it looks like a continent. Guess what his name is? #horsenation @thehorsenation

Alex Russell: “April here has a seahorse on her neck. She also has a garter belt and stockings.”

#Horsenation I think my pony’s snip looks like the North and South American continents. How’s that for #PanAmPride?

Susanna Aspbury: “My boy Smokey has a heart on the right of his chest.”

Rebecca Waldron: “Scooter enjoys channeling the bird on his side on a regular basis.”

Deb Bauer: “This is a picture of Charlie’s Gettin’ Time, owned by Kelly Kylis, and rescued from the kill pen in January 2015. He’s gaited, and has a perfect bunny on his left hip.”

Christy Castle: “This is my yearling filly Chickadee. And she has a chickadee flying on her forehead.”

Cynthia Sharpe: “This is my 9 year old gelding skippy when he was a baby! He also has a horse on his neck and looks a lot like Da Vinci!”

Jessica Mongeau: “Meet UK, who is named such because of his markings. His U has always really impressed me, as it looks like it was typed on his side in a fancy font. His K looks more like a lowercase k (or a frightened cat). It is pretty funny that a lot of people assume he is named UK in a way relating to the United Kingdom, the looks of surprise when I point out his markings and say “Nope, the name is because he has a U and a K on his sides,” are usually followed by remarks about how cool they look.”

Chelsey Baumgarth: “One of Ellie’s offspring has an upside down exclamation point, continuing the South American love. Or maybe I’m just making the correlation because of all of the margaritas I like to drink.”

Meagan Killen: “This is Dolce. You can see a horse head on her neck there.”

Kimberly Beldam: “A colt I bred, Kingston, has an open mouthed trumpeting elephant on his hind quarters.”

Ethel Salinas: “This is Chip, a rescued horse. Not only is his form spot on but he has a heart, a seahorse and the profile of Snoopy’s head.”

Sarah Fireflyfarm: “I always tell the kids at my barn that my horse, Twist, came with an ear ring. They ask, “Did someone pierce his ears?!” Nope.”

Hailey Petzoldt: “My yearling percheron/paint filly Kimber looks like she has a jumping fish across her hip and very loud markings in general.”

Trinity Hussman: “Jackson has the Hawaiian islands across his side.”

Dar Sikora: “LaLa, my TWH/Paso Fino cross has a dog on her side.”

Ashlee Mahan: “Spirit has an arrow on her side.”

Montana Wasson: “Our colt has the shape of Idaho on his forehead.”

Keep an eye out every Tuesday for the announcement of our weekly 24-hour photo challenge, presented by Absorbine! Go riding!