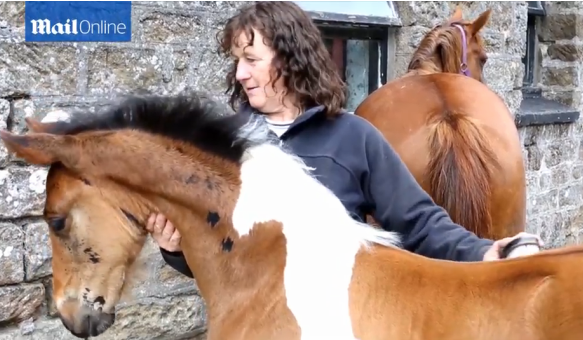 Finding meaning in our horses’ seemingly-random markings is a kind of tradition for horsemen everywhere (“his blaze looks like an arrow!” “her pinto spot looks like a swan!”) But when Da Vinci came along to the Fyling Hall Riding School, no speculation was needed: his pinto spot was a pretty undeniable shape. Da Vinci, like all horses, is followed by his shadow … plus this additional “shadow” of a horse, running up his left shoulder and side of his neck.

Fyling Hall is a small private school in North Yorkshire, England including a small riding stable. With access to the North York Moors National Park and its setting right on Robin Hood’s Bay, students can enjoy miles of riding trails and beach. The riding school also takes students to local shows and gymkhanas. As mentioned in the video, Da Vinci is already a treasured member of the riding school — hopefully all of his new-found fame thanks to his markings won’t go to his head!