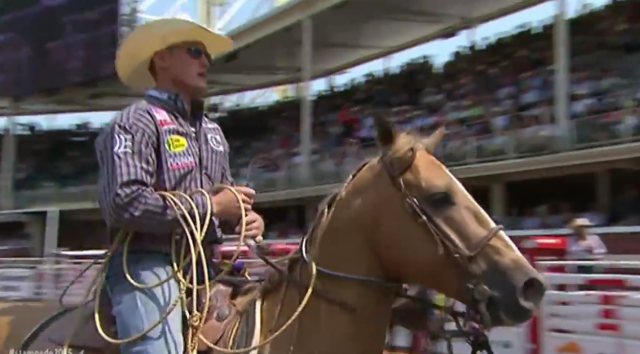 Cooper was disqualified for “mistreatment of livestock” after hitting his horse with his rope. Did he deserve this ruling, or was it a knee-jerk reaction by officials?

The Calgary Stampede just can’t seem to stay out of the headlines this year (we reported earlier this week on the death of four horses at the Stampede’s chuckwagon races.) The latest story to come out of Calgary is rodeo officials’ disqualification of world champion tie-down roper Tuf Cooper after the cowboy struck his horse with his rope during a run on July 8.

The Stampede is under the lens for its disturbingly-high record of equine fatalities in recent years, with increased attention by animal rights groups and the general public. Through the rodeo’s increased commitment to animal health and welfare, the six rodeo judges and Stampede officials unanimously decided that Cooper’s actions merited his immediate disqualification from the rest of the tournament-style event. It’s believed that this is the first incidence of a competitor’s disqualification from a rodeo for this type of action.

Many critics support Cooper’s qualification, citing that he unnecessarily struck his horse in his desire to win. Others are citing the Stampede’s decision as a knee-jerk reaction to pressures from radical animal-rights groups, already putting the heat on the rodeo for its high equine death toll.

Cooper is one of the most highly-visible individuals competing at the Stampede, so his actions represent the entire sport. However, some are asking why Cooper should be so punished when barrel racers use a similar over-under whip in the run for home. (There is, of course, the question about whether or not calf roping should be considered abuse, but we’ll leave that for another discussion.)

The devil is in the details: the issue at hand is perhaps not the act of hitting a horse, but the way in which it’s done. Otherwise, in the eyes of animal welfare groups, any of us using a crop or whip, or even striking a horse for naughty behavior, could be considered an abuser. Is this just a case of rodeo, under so much outside pressure, folding to animal welfare groups and making an example out of a high-profile individual? Or was Cooper totally out of line in the way he handled his horse (he struck the horse five or six times) and deserving of his punishment?

What do you think, Horse Nation? Share your thoughts in the comments section or join us in the forums at Equestrians Anonymous.