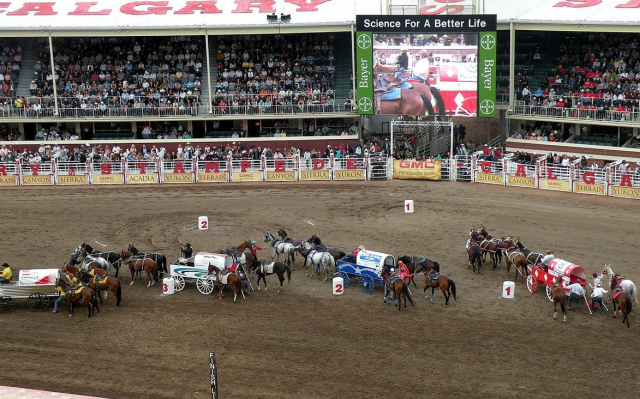 When it comes to safety the Calgary Stampede’s chuckwagon races don’t have a good track record, with the event’s 2015 edition ranking among the most tragic in recent history.

From human cannonball performances to extreme sports showcases, Alberta’s annual 10-day rodeo festival Calgary Stampede aims to entertain. But with four horses having been euthanized as a result of injuries sustained during chuckwagon races in just over a week, the popular event is now under heavy fire from horse lovers and animal welfare groups in Canada and beyond.

A timeline of the fatal incidents:

Saturday, July 4: A horse belonging to the team of Layne Bremner fractured its right hind cannon bone due to contact with another wagon and was immediately euthanized. The driver, Layne Bremner received a “no-time”, $2,500 penalty and a five second penalty for interference. View details.

Monday, July 6: A horse belonging to the team of Shane Nolin was euthanized due to “severe injuries” after making contact with the lead horse of another team, driven by BJ Carey, on the track. The Chuckwagon Safety Commission determined both drivers were culpable for the accident. In accordance with the Calgary Stampede’s rulebook, both drivers shared the financial burden of the $10,000 fine. View details.

Saturday, July 11: An outrider horse in Layne Bremner’s outfit pulled up during the race with a suspensory ligament rupture. There was no contact made with another horse or wagon. He was euthanized after veterinarians deemed the injury untreatable. View details.

Sunday, July 12: An outrider horse in Dave Galloway’s outfit pulled up injured at the end of the race, also with a suspensory ligament rupture. There was no contact made with another horse or wagon. He was euthanized after veterinarians deemed the injury untreatable. View details.

Over 50 horses have died in Calgary Stampede chuckwagon race events since 1986. Following the death of three horses in 2007, four horses in 2009, and six in 2010, Stampede management announced new rules intended to increase race safety, including pre- and post-race veterinary inspections and rules mandating that no horse may run more for than three consecutive days.

The heightened oversight, however, hasn’t stopped accidents from occurring.  In 2012, three horses died in a crash after the lead suffered an aneurysm pulling the others down with it. View video of incident (warning: readers may find footage disturbing). In 2013, an outrider horse collapsed with a burst lung artery and died shortly afterwards, and in 2014 a man was injured and a horse was killed in separate incidents at the track.

The Calgary Stampede, which concluded yesterday, bills itself as a celebration of western heritage and agricultural life, and officials argue that they work closely with the Society for the Prevention of Cruelty to Animals and the Calgary Humane Society to ensure that the horses are well treated. But after this year’s string of accidents it seems clear that something has to change.

The Vancouver Humane Society has repeatedly called for the immediate suspension of the chuckwagon race and suggests establishing a panel of independent equine experts to determine if anything can be done to make the race safer.

Says VHS spokesperson Peter Fricker, “People across Canada are outraged and they are sick of hearing about the needless death of horses at the Stampede.”