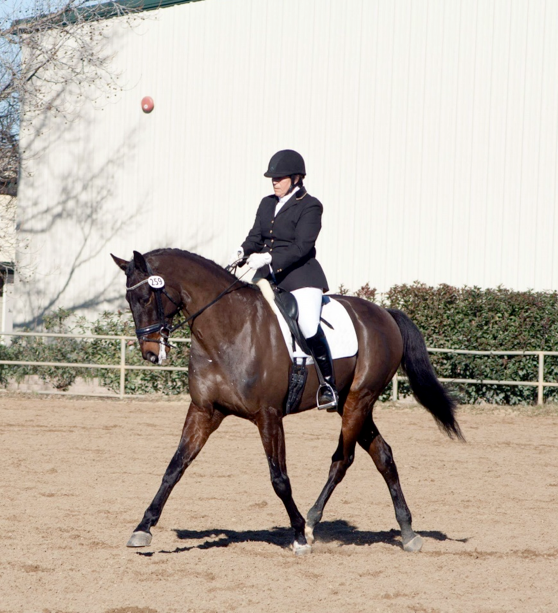 Seana Adamson, the “Equishrink,” is facing one of her biggest equestrian challenges yet: rehabbing her young horse’s serious injury.

Eragon, prior to injury

Welcome back to the insanity of rehabbing your baby dragon! Last month I filled you in on the process of dealing with Eragon, my six-year-old KWPN monster. He is now forty-five days out from a serious injury to the collateral ligaments in his left front foot. You can read my first installment by clicking here, but the gist of the story is that I was able to use a variety of techniques and resources to get Eragon settled in to starting his sixty days of stall rest, while preventing him from repeating the behavior that had caused his terrible injury.

Sixty days of stall rest sounded impossible. I cringed when I heard this prescription as locking my baby dragon into a box for two months seemed horribly cruel. But his whole coffin joint was extremely unstable due to the nature of his injury, so my wonderful team of vets convinced me of the importance of this initial healing phase. Dr. Brad Jackman explained that because a horse is constantly weight bearing even in the stall, they are performing the very gentle form of movement that is perfect for this initial phase of healing.

My goal for the first sixty days was to keep Eragon as quiet as possible. The shock collar continued to work its magic: its mere presence kept my baby dragon in a state of placid patience. I was fascinated by the total self-control at Eragon’s disposal. His paddock buddy Trey would buck and play, trying to instigate a reaction from Eragon, but to no avail. “Peace out,” Eragon seemed to be saying, “I have the collar of shame on my neck so I only move V E R Y  S L O W L Y.”  I did not need to apply any further corrections with the collar; in fact, it seemed I could put a fake collar on him and achieve the same result. I always thought that when a horse acts wild they just can’t help it, that it is pure instinct and they have no conscious control over their behavior, except perhaps through years of daily, methodical training. Eragon’s instant transformation from airborne baby dragon to perfect placidity flew in the face of my expectations.

Eragon has a 12′ x 16′ stall and as I mentioned in my last installment, I built a 12′ x 16′ paddock off his stall so he could be out in the sun. Though Eragon stayed locked in the stall at night, first thing in the morning we opened his door so he could go out into his paddock. As long as there was someone around his door stayed open, but when we all had to leave I locked him back in the stall. Even with this very careful monitoring he did manage to get cast in one of his mini enclosures, resulting in scrapes and swelling in three of his four legs. I smiled wryly at my vet.  “At least he has 11 months to heal up from getting cast!”

I opted to pursue IRAP injections into Eragon’s injured coffin joint. Though this ultimately cost me around $1800 as my insurance would not cover it, my vet urged me to try to protect his coffin joint from developing arthritis a year or two down the road. Once again the question arose: when does a good healthy inflammatory response to an acute injury become a degenerative state of chronic inflammation that can lead to all of the nasty side effects we associate with chronic inflammation, such as erosion of cartilage and formation of bony spurs? I don’t know that answer but I decided that if I did not do IRAP and a year or two down the road Eragon developed arthritis, I’d never forgive myself.  He still may develop arthritis, but at least I’ll know I did what I could.

Dr. Chrysann Collatos explained to me that there are three phases in the healing process of any soft tissue injury:

How to Entertain Your Baby Dragon

Eragon has received plenty of attention during his sixty days of stall rest. His day starts with a good grooming and a casual stroll to find the choicest patches of grass around the property. He continues to enjoy licking his upside down water tub, which I described in my last post, and he has an assortment of toys that he plays with when locked in his stall.

I do daily exercises with his hind legs to keep his nervous system sharp. I start with a handful of sugar cubes and a dressage whip. I touch his hind leg with the whip as a signal to lift it up. When he lifts his leg he gets a sugar cube. I like to do three sets of ten leg lifts, and no, he does not get a sugar cube every time! Maybe someday this will turn into a great piaffe, though for now I don’t want his front legs to move. Here’s a picture: notice his collection of toys in the background!

I know from personal experience that an injury in the foot can affect the whole chain of the leg, creating imbalance in the knee, hip and spine. So I had our wonderful local physical therapist Denise Montayne work on Eragon’s full body to keep him as balanced as possible during his stall rest. If nothing else, he really enjoyed it, as you can see in this photo.

I recently heard an interview with former tennis champion Billy Jean King. She described one of her personal mottos which is “Champions Adapt.” She explained that during her illustrious tennis career she had eight knee surgeries. Her goals would change overnight from “I’m going to practice for eight hours today” to “I’m going to try to bend my knee a quarter inch today.”

Champions adapt to pursue their goals in any way they can. Accordingly I had to look carefully at my own life and look for new goals to achieve.

My first goal was to achieve a better sense of balance and perspective. It is always dangerous when happiness is dependent on someone or something that is outside of yourself. Whether it is a talented horse, or a marriage partner, if your internal sense of well-being requires cooperation from something that is out of your control, then the potential for disaster increases exponentially. The challenge for me was to find sources of joy that weren’t dependent on riding my super fancy dragon. I’m so fortunate to have a wonderful five year old gelding, but I didn’t want my happiness dependent on his soundness either. I could not afford to go out and buy another expensive horse, but I did find an inexpensive pony on Craigslist, and have found enormous pleasure in playing around with him. I know, it sounds like I was just trading one “out of my control” happiness factor for another, but it was so nice to find that I could really enjoy a modestly priced project pony.

Just turn on the news and you can find a hundred reasons to be thankful. I constantly reminded myself to be grateful for my lame pony problems. How many people would trade places with me? “Here, I’ll take your lame horse, you go live in this Syrian refugee camp.” I watched a young dressage trainer in our area who had a wonderful horse that she’d been immensely successful with. For the second time in a year he colicked, and eventually had to be put down. She was so brave in her response. There were no “poor me” posts on Facebook, no moping around or calls for attention. Though we all knew she must be devastated, I admired her stoic persistence. I realized I had to suck it up: my horse was lame but her horse was dead. How dare I be self-indulgent in my sadness?

Within the first few weeks I found my relationship with Eragon shifting into a new phase. He seemed quite content to be fed, groomed and pampered without all that silly under-saddle stuff to deal with. Our friendship solidified and his narcissism grew to impressive proportions.  Our conversations sounded something like this:

Seana: “Good morning Eragon, I love you.”
Eragon: “I love me too. You’re five minutes late.”
Seana: “How are you today?”
Eragon: “I’m hungry. My butt itches. Open my door NOW!”

So now I have a pudgy, self-absorbed, hungry baby dragon who pretty much considers me his personal servant. That’s okay! We’ll start hand-walking soon and life goes on. Look for a new installment in a few weeks on hand-flying — I mean hand-walking — your baby dragon.

Seana Adamson Ph.D, is a psychologist specializing in Sport Psychology for equestrians. She is a United States Dressage Federation Gold Medalist, has been training dressage horses and riders for over 30 years, and is the author of “Memorize That Dressage Test: A workbook of mental games to improve focus and flow.” Learn more by visiting seanaadamson.com.