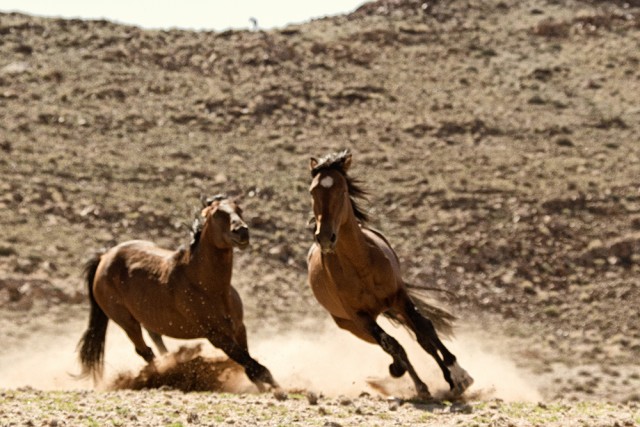 As the film opens, Lucky is born on the decks of a ship bound for Namibia. It is 1911 and the horses are destined for a hard life working in a mine.

Through fate or consequence, Lucky’s dam dies and the local stable boy adopts him. The two forge an unbreakable bond because #horsemovie.

Up until this point, I enjoyed the flick. The story was told entirely from Lucky’s perspective, which was cute despite lacking the depth of its predecessor, Black Beauty (1994), and the yet to be made War Horse (2011). The dialogue edged around sensitive issues, like race relations and class prejudice in early 20th century Africa, without obliterating its family-friendly PG rating.

Unfortunately, WWI arrived and the mining town – along with the movie’s story arc – was blown to kingdom come. The people were evacuated and the horses abandoned. Lucky somehow manages to survive alone, grow into a magnificent stud, return to defeat the current stallion – a Friesian, seriously? – and lead the herd out to survive in the desert.

It’s all a tad implausible. Here’s the trailer if you want to check it out:

But here’s the interesting thing … the story is sort of true!

Dr. Telané Greyling has been studying the wild horses in Namibia for over twenty years and is a central figure in the Namibia Wild Horse Foundation. She records births and deaths and is able to identify every horse in the herd.

Greyling theorizes the Namib horses stem from two distinct groups: horses bred for either the diamond mines or racing at the Kubub Stud Farm and military horses that escaped the base in Garub during German bombardment. Today there are on average 200 horses in the wild herd.

The Garub military base had a borehole, a permanent well, that would be the horses’ only source of water until the 1990’s.

During a drought in that decade, authorities stepped in and built four additional water troughs. The government also provides supplementary feed in the case of extreme drought. A big part of that decision was Greyling’s research, which proved the horses did not negatively impact any native wildlife.

Life is hard for the “Namibs.” During drought years, African predators pick off old or sick horses and the very young. The remaining animals must prioritize water by balancing their drinking time with the time needed to find food. Greyling told Africa Geographic, “They have learned to tolerate levels of dehydration that a domestic horse would find extremely stressful.”

Research shows that during the hot summer months (November to March) they may go 30 hours between drinking, while during the cool winter months (May to September) intervals can be as long as 72 hours!

They have also adapted to supplement their diet by eating their own dried manure. The manure contains almost three times more fat (1.99%) than the area’s dry grass (Stipagrostis obtusa – 0.7%) and almost twice as much protein (6.1 instead of 3.1%), while the extremely dry environment lessens the chance of parasitic infection.

The home of Namibia’s Wild Horses is now a popular tourist destination. Like all horses, they embody the rugged beauty of their surroundings and a natural will to survive.

Click here to find out more about Namibia’s Wild Horses.