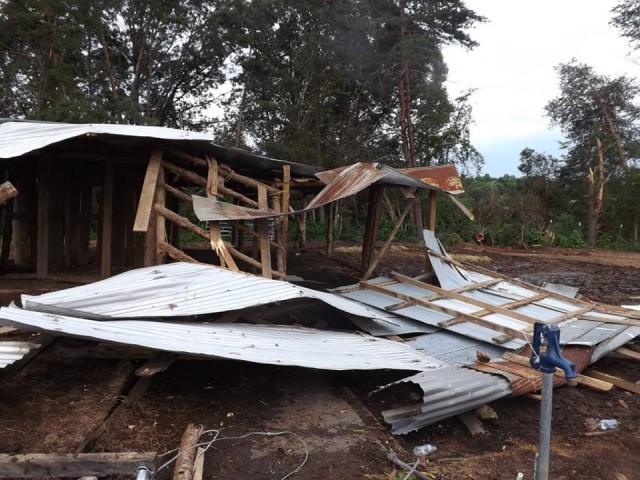 After severe thunderstorms claimed the life of a rescue horse and destroyed multiple structures, this Virginia horse rescue is working hard on cleanup and repairs.

Much of the country has seen more than its fair share of severe weather in the last week, and Hardy, Virginia was no exception. On Thursday, June 18, 2015 an intense severe storm slammed through the area with particular ferocity, ripping through the Roanoke Valley Horse Rescue. Staff describe the storm as “worse than anything we’ve ever seen.”

When the storm had passed, staff rushed back out to check on the farm and discovered widespread damage. But most tragically, they discovered that flying debris in the storm had killed a horse, a rescue named Daisy.

Everyone, we have sad news…. we lost Daisy this tragic evening. Everyone is beyond devastated. She was killed by a…

At least three more horses suffered minor injuries in the storm. One barn was completely destroyed, knocked to its side, and numerous other barns and structures sustained damage. Feed was ruined in the storm and multiple trees have fallen on fencing and structures.

It’s always sobering to see such losses due to Mother Nature’s fury, but it’s particularly heartbreaking that a horse rescue suffered such damage, already reliant on volunteer help and donations. However, as rescue founder Pat Muncy stated, losing property and buildings is nothing compared to the loss of a horse.

Estimates are in for the cost of repairs, and the numbers are overwhelming:

A GoFundMe account has been set up to help Roanoke Valley Horse Rescue. At the forefront of volunteer efforts is ensuring that the horses at the rescue are receiving the care they need amidst the chaos of cleanup, and that the injured horses are recovering well.