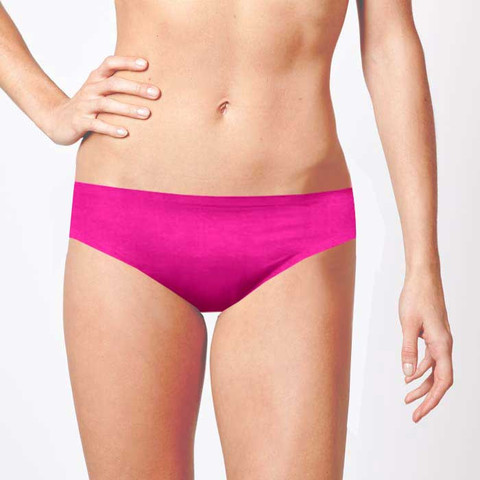 Because finding appropriate underwear is a serious deal.

Cartoon (c) The Idea of Order.

Some of you may remember the comic I did regarding finding the perfect breeches (above). Clearly I have some quirky issues regarding wearing pants that might eventually need to be addressed. Not shockingly, I have similar issues with finding acceptable underwear.

In fact, in the interest of full disclosure, I feel it necessary to admit that I’ve basically had an antagonistic relationship with underwear my entire life. Seriously. Stifle your laughter; it’s a serious problem.

As a small child — think six or seven — I would throw an absolute fit when my mother would bring home new underwear and they didn’t fit they way I thought they should. Not being a particularly svelte kid I especially couldn’t stand when they were too high and the band cut into my belly button. Of course I was equally appalled if they were too low and clung under my belly button. First world problems indeed. The thigh openings also needed to be just so and not cling or grab but they couldn’t be too loose either. It was a fairly frustrating experience (probably more so even for my poor mother who couldn’t understand why her child had such a meltdown over something as silly as underwear).

Fast forward to high school where I tried every imaginable type and cut of underwear. I still hated them all. I especially hated them all under breeches. I’m pretty sure the number of people who look particularly stunning in white breeches is fairly limited and I’m equally sure not even those people enjoy VPL. I ultimately opted for compression shorts under my breeches as they left no VPL and I could tolerate the waistband. Of course out here in the desert wearing what basically amounts to two pairs of pants when it’s 110 degrees out also creates some problems.

Cue Knixwear. With the show season underway and the weather only getting hotter, I was as interested as I could be about giving these underwear a try.

The standard Knixwear boasts no seams, which means virtually no VPL, and a super lightweight, antimicrobial material that wicks moisture and prevents odor. According to their website these even dry 2-3 times faster than regular underwear.

Knixwear also offers a line called FitKnix that’s specifically geared towards athletes. These underwear are also seamless and antimicrobial but are made of a soft LYCRA blend designed to maximize stretch and recovery (this line also comes in cute colors).

That all sounded pretty good to me so I opted to try the standard Knixwear in a high rise version since I knew if they ended lower than my show breeches I’d probably have a small breakdown.

When they arrived, I was impressed by how lightweight the fabric felt. I can also say that they truly ARE seamless everywhere.

Note how sheer the fabric is and the lack of seams.

I tentatively tried them on ready to be heinously annoyed. But I wasn’t. They honestly are the most comfortable underwear I’ve worn. Somewhat surprised, I immediately put my show breeches on over them. No VPL and my breeches didn’t look horrifying (well, no more so than white breeches ever do).

Satisfied with my first test, the next morning I put on the Knixwear with my regular breeches and went out to ride. After 10+ hours at the barn riding five horses and teaching numerous lessons the Knixwear still felt great. I again used them the following weekend at a show and was impressed by the lack of VPL as well as how much cooler they felt. The lightweight fabric was also excellent in that it didn’t bind or curl up and the lack of seams meant that there was no awkwardness trying to sit the trot.

Willie and I sans VPL! Photo by Tamara Torti of Tamara with the Camera.

Ultimately Knixwear are the most comfortable and functional underwear I’ve ever worn both in and out of the saddle (and I’ve pretty much tried everything).

If you’re interested in trying Knixwear you can see their full range of products on their website. In addition to their athletic and standard lines, they also offer some really cute, lacy types as well. You should also check out their Facebook page for additional information and promotions.