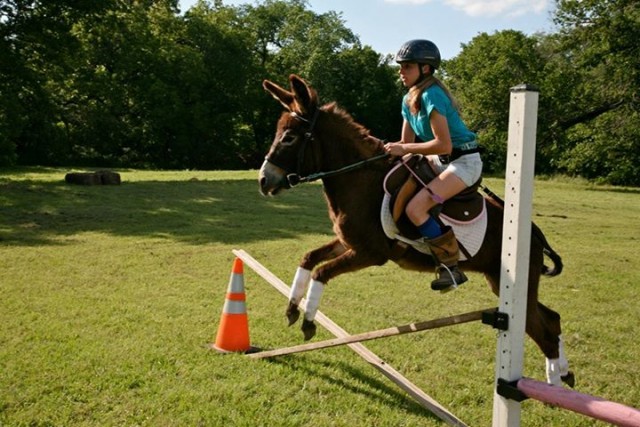 In September, we brought the story of Ryan Hall and her adopted donkey KitKat to Horse Nation: you may remember the heart-warming story about how young Ryan earned the trust of this untrusting and nearly-feral young donkey, building a partnership that has to be seen to be believed. If in-hand eventing were a competitive division, Ryan and KitKat would have it on lockdown.

However, as we should have suspected when a young person’s love for her animal companion is concerned, that was only the beginning.

Eight months later, Ryan and KitKat are truly breaking the mold and writing the book on what donkeys are capable of achieving with just the right understanding person. Anyone who’s ever tried to make a donkey do anything it doesn’t want to do will quickly realize that what Ryan and KitKat are able to do together isn’t just cute, it’s downright uncanny. Ryan has KitKat going under saddle now, hacking her around the home farm as well as over fences like it’s no big deal.

We caught up with Ryan for a little Q&A session, during which she reflected on the journey so far.

When we first met you and KitKat in September, how much progress had you made at the time? How would you describe your relationship with her now?

I had KitKat for about a year and half in September. Even though I have worked with her only about 15 times since then, we have made so much progress, especially under saddle as well in liberty. In September KitKat would follow me over single jumps; now she will follow me over full courses and do flying changes when cued. Overall we’re working better as a team.

What are your next goals for Kitkat?

My next goal for KitKat is to get her to move off the leg under saddle, we’ve been working on tons of exercises and I thinks she will have it down very soon. The hard thing about training a donkey is you can’t go Google how to get a donkey to move off the leg, no one writes about it. Therefore I basically have to make up and figure out everything myself (including cues.) In the future I hope to get her in a trailer and have a demo at Rolex to show how donkeys can be more than just pasture animals.

What have you been up to as a young event rider?

I recently purchased an OTTB named Thickett, and together we have shown two novice and one training and will continue showing training. I have also been staying at Ellen Doughty-Hume’s barn in Rockwall, TX and riding many horses a day, which helps me improve as an equestrian.

What would you say to “doubters” that try to tell you that you’re going against KitKat’s nature as a donkey?

When people try to tell me that I am “forcing” KitKat to jump, normally I will go off on the “donkeys WILL NOT do what they don’t want to do” speech and a bunch of people back me up. There are always people telling me I’m too big, which I know I am not, because she is the size of a medium hunter pony. People tell me it hurts her, but if it did she wouldn’t do it. Like a few days ago, [my friend] Anna and I were walking KitKat (while mounted) and KitKat took off towards this skinny, and just wanted to go jump, then she jumped the ditch after. It’s hard for me to believe I got this donkey “wild” a little over two years ago and everything she knows I taught her.

What are some of the big differences in training a donkey under saddle versus a horse?

First off, donkeys don’t move off the leg naturally, bottom line. You can’t tell them what to do, you must ask them; if you ask for too much to0 soon you may ruin your chances of ever earning their trust back again. I really don’t know how I trained KitKat, to be honest; when I watch videos of us working I don’t realize that half of the cues I give her automatically, and she responds. Overall donkeys are not horses.

Do you notice any similarities in training donkeys and horses?

I don’t have much experience starting horses under saddle, but a few weeks ago Anna and I got to teach a horse to jump and if not for KitKat teaching me first, that horse would have been a lot harder for me. If you can ride a donkey you can ride almost anything.

How do you work with KitKat to train her away from the instinct to stop right after ever fence?

We truly have been working on moving on after fences, instead of stopping. Mostly when Anna is over, sometimes I’ll have her run in front of KitKat and help encourage her to move on after which is slowly working.

As Ryan mentions, no one else is doing what she does, so she’s learning everything as she goes. But for a partnership who’s left entirely to its own devices, Ryan and KitKat are proving, one step at a time, that the sky’s the limit for an eventing donkey. we can’t wait to see what comes next.