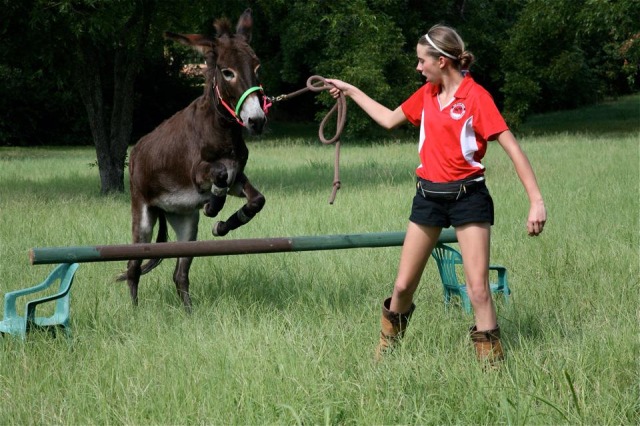 Because some relationships were simply meant to be.

Ryan Hall, in some ways, is a “typical” teen eventer — she’s got goals of the Young Rider Championships, Rolex, the Olympics, college in Kentucky and training in Europe. She’s a working student for Ellen Doughty-Hume of Pegasus Eventing in East Texas, competing in Area V, as well as an active member of Pony Club.

But unlike most young, aspiring eventers, Ryan’s got a special training project at home who is rapidly progressing from having never worn a halter to 2’6″ verticals, banks and logs: Kitkat the donkey.

Ryan didn’t exactly set out to train a donkey to event from the ground, at least not at first. She had received the ultimate Christmas present of a new horse in 2012, who proved to be too green to help the young rider progress in her experience. He did, however, show a lot of raw natural talent in jumping out of his pasture on multiple occasions at the Hall’s cozy two-stall home barn. A brief parade of pony companions proved to bond too quickly with the gelding, making everyone’s lives difficult when the horse needed to leave the property for lessons and training. And then a friend suggested that the Halls get a donkey for a companion instead.

Enter KitKat, an unhandled, un-halter-broken young donkey jenny, purchased from a woman downsizing her herd of 30. KitKat was separated and loaded from the herd via a series of corral panels and a whole lot of rodeo; when she arrived at home the Halls had to back the trailer into the paddock and release her right into the field. It took Ryan and a friend from Pony Club a few weeks just to be able to slip a halter on KitKat. But that didn’t stop Ryan — she got the donkey accustomed to being touched, groomed and handled, spending all of her free time after school out in the paddock with KitKat.

As Ryan’s mother Tina jokes, “Ryan has the personality of a donkey: She’s extremely headstrong, can be frustrating to deal with and there’s NO talking her into doing anything she doesn’t want to do.” Initially, KitKat served as a fun escape for Ryan after constantly being in “training mode” with her green gelding — she could blow off some steam playing with the donkey. As Ryan dealt with some rough periods with junior high bullies, KitKat was there as a refuge and companion. “[Ryan’s] loyal and loving underneath it all. Perhaps that’s why she and KitKat get along so well — they ‘get’ each other!”

Ryan and KitKat schooling a vertical.

One thing led to another. As Ryan and KitKat developed a bond simultaneous to Ryan’s development as a teen event rider, Ryan started riding KitKat on little trail rides around the property and teaching her to jump in-hand. The jumps got higher, KitKat’s ground handling improved, and the donkey handled every question Ryan sent her way from verticals to oxers to ditches and logs and banks. KitKat can sidepass as well as walk, trot and canter.

Donkeys, of course, are notorious for doing only exactly what they want to do. Watching this slip of a teenager jumping with her donkey who follows her everywhere speaks for itself of Ryan and KitKat’s relationship. (Tina’s in total awe, especially after she attempted single-handedly to lead KitKat home on a few escapades in which donkey and gelding escaped from the paddock — no bribe nor threat would stir the animal.)

Ryan’s other passion is photography. Her Instagram account @EventingMyDonkey is full of training photos from along her journey as well as photoshoots she sets up with KitKat.

Ryan generously put this video together just for us at Horse Nation, with a shootout to SmartPak who recently shared a photo of her and KitKat:

While KitKat may not be four-star bound, her bond with Ryan far surpasses any normal competition. Go Ryan, go KitKat, and Go Riding!