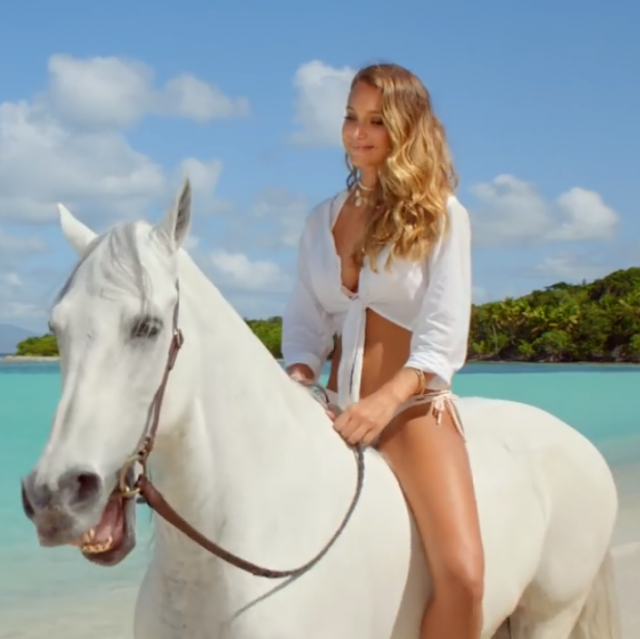 If you’re anything like me, the instant a horse makes an appearance in a TV commercial you’re glued to the screen (though who or what the commercial is actually selling is usually lost by the wayside.) Whether it’s a moonwalking pony, a herd of white horses galloping through the mist or the Budweiser Clydesdales themselves, if it’s got horses in it, I’m there, from the bizarre to the beautiful.

And then I came across the “Hannah and Her Horse” series by DirecTV, and realized that horses in commercials had reached a new level of silly.

Confession: totally uninformed, I assumed that “Hannah” was just a creation of the commercial writers. Turns out, Hannah is Hannah Davis, this year’s Sports Illustrated swimsuit cover model. Whether upping the overall “sexiness” of its ad campaign is doing anything for DirecTV’s sales I cannot tell you, but the commercial series definitely has people talking. And, you know, horses talking too.

Yeah, that one just really makes me laugh. I’m running out of legitimate factual information to share with you at this point. DirecTV, these commercials are silly.

I was really looking forward to this last one, thinking that it was a real “Behind the Scenes” video that would answer some of my questions (how much of this horse is generated by a computer? Did Hannah interact with a real horse at all during any of the filming? Also, where is this beautiful location, because I’d like to vacation there, thanks.) Except no, it’s yet another silly talking-horse commercial (and my goodness, that horse has the vocabulary of a sailor.)

Oh, television … you never cease to baffle and amaze.