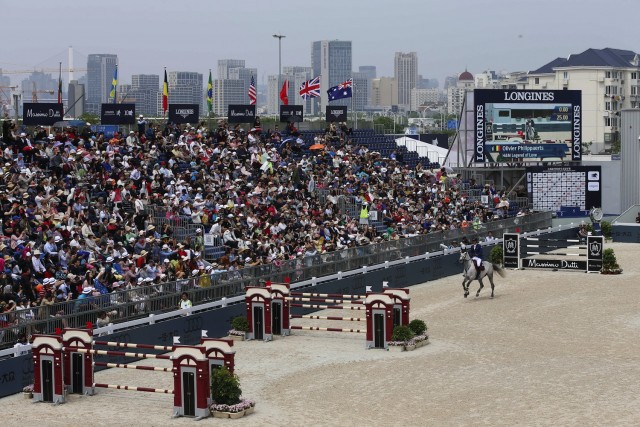 The Longines Global Champions Tour has already visited three continents in one month. Where are the best show jumpers in the world heading next?

The crowd and arena in Shanghai.
Stefano Grasso/LGCT

Since kicking off its tour at a new venue in Miami Beach in early April, the Longines Global Champions Tour has clocked some serious miles in its trek around the world, showcasing the very best show jumping in beautiful and elaborate venues. While last year’s champion Scott Brash won handily in Miami, the leader board shifted as the tour progressed to three more venues, with competition proving to be both very tight and incredibly unpredictable.

At the end of April, just after the World Cup wrapped up in Las Vegas, the LGCT set up shop in Antwerp, Belgium, right on the banks of the River Scheldt which allowed boats to literally cruise right past the show ring. Here in Antwerp, the event was won by Frenchman Simon Delestre on Ryan Des Hayettes — but perhaps more influentially, at least for the short-term global rankings, Bassem Hassan Mohammed of Qatar finished eighth. This placing earned him enough points to take the lead over rival Scott Brash by a few points.

This would turn out to be the only moment so far in the tour that anyone overtook Brash in world standings. From Belgium, the Tour skipped over to Spain to the beautiful Club de Campo Villa de Madrid, an exquisite country club/equestrian facility outside of Madrid. This third leg of the tour was won by Portugal’s Luciana Diniz aboard the stallion Winningmood, jumping her up to second place in the world standings. Brash finished fourth to take the overall world lead heading into the fourth leg.

On its third continent in one month of competition, the LGCT set its sights on Shanghai, China this past weekend, drawing more crowds of enthusiasts and VIPs to the China Art Pavilion. 2015 marked only the second year of international grand prix competition in mainland China after a special dispensation was approved to allow international horses to enter the country.

In Shanghai, Harrie Smolders aboard Regina Z took the win, with Brash finishing fifth to widen his lead on the season. While winning individual legs of the Tour is obviously high on any rider’s list of goals, it’s also important to understand that finishing consistently in the top ten and keeping the endurance to do so all season will give a rider like Brash the ability to win yet another overall Tour.

The Global Champions Tour heads to Hamburg, Germany this weekend for the fifth tour stop. Following Hamburg, the horses and riders enjoy a short respite before firing up again on June 11 in Cannes.