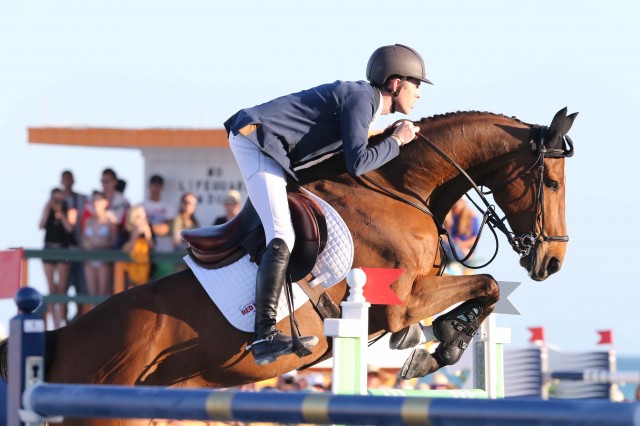 Scott Brash reminded everyone why he’s number one in the world rankings this past weekend, handily winning the inaugural Longines Global Champions Tour of Miami Beach Grand Prix title

No one in the equestrian world had a better weekend than Scott Brash. Based in Scotland, Brash has already won two (count ’em, two) Longines Global Champions Tours before the age of 30, and he’s already showing early promise that he could make it a record three-peat for 2015. This weekend alone, he won the American Invitational with his new horse Hello Forever, then went on to kick off the Longines Global Champions Tour 2015 season by bringing home the Grand Prix win aboard his usual partner Hello Sanctos. Oh, and he was in MIAMI BEACH the whole time. How was your weekend?

In an exciting four-horse jump-off, Qatar’s Bassem Hassan Mohammed aboard Palloubet D Halong set the pace with a clean, fast round. A refusal knocked Frenchman Roger Yves Bost and Nippon D’Elle out of championship contention, opening the field for Brash and Hello Sanctos. Though they ticked a rail on the first fence, the number-one ranked pair ripped through the rest of the round fast and clean to take the lead. When the final contestants, Pieter Devos and Candy of Belgium dropped a fence, Brash had his first 2015 GCT victory in hand.

Here’s the jump-off round (to fast-forward to Brash and Hello Sanctos, start around 1:16:00. To watch all of Round 2, simply back up to the beginning!)

The Longines Global Champions Tour heads to Antwerp, Belgium for its next stop, April 22-25. Meanwhile, Miami Beach looks forward to hosting more international Grand Prix events, according to mayor Phillip Levine: “This is absolutely incredible. We are so honored to have this amazing Longines Global Champions Tour event right on the sands of Miami Beach and we know this is just the beginning of a long-term event. We will welcome you back next year. This is just absolutely exciting for everyone to watch, all the tourists, all the residents and congratulations to Scott. This fabulous!”