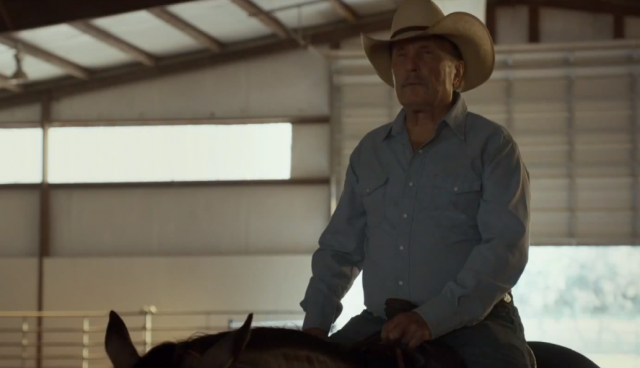 This balances out the fact that James Franco is also starring.

Our favorite director-actor-screenwriter-cowboy Robert Duvall is back on the big screen this year with his latest project, an indie film called, promisingly, Wild Horses. The movie debuted at South by Southwest (SXSW,) Austin, Texas’ annual early-spring music and culture festival. And if it’s a Duvall project, you know that horses will be in it somewhere: Wild Horses, at least from the trailer, appears that it’s going to deliver.

Now, I love a feel-good horse movie as much as the next equestrian, but I also appreciate a movie in which the horses have a prominent presence but are simply horses. This is exactly what appears to be happening in Wild Horses–it’s a father-son story set on a Texas ranch about estrangement and acceptance but also family secrets and an old cover-up (and lots of other more confusing plot lines according to multiple reviews.) The horses are just part of the backdrop and authenticity of the setting, and I’m 100% down with this modern-day western that lacks a lot of that “cheesy” western feel.

Duvall is known for his horsemanship–Amanda Uechi Ronan detailed the movie man’s equestrian life–and he does his own riding for his movies. Considering that he’s in his early eighties, I’m very impressed: it’s not just sit-on-the-horse-and-look-pretty riding, it’s actual thundering-across-the-desert-probably-waving-a-gun-around riding. (I can’t quite tell if James Franco, playing Duvall’s estranged son, is doing his own riding in the very brief glimpse we get of his character on a horse–if it is him, we’ll just hope that his riding is better than his acting; the man sounds like he’s still just reading the script.) Josh Hartnett also stars, somewhere in there, as Duvall’s other son. It’s pretty clear that there are some bad things going on, as the horses are quickly replaced by cars, guns and a lot of shouting, but we’ll wait and see for ourselves when the movie comes out.

Wild Horses didn’t get stellar reviews at its SXSW screening, but we at Horse Nation give our fellow equestrian Robert Duvall a thumbs-up for still getting the job done in the saddle at the age of 81. Also, as Amanda Ronan stated, “I just want to say, if there is a world where Josh Hartnett (my high school celebrity crush) and James Franco are brothers and they presumably own a ranch … I want to live in that world. I don’t care that they are clearly involved in some criminal shenanigans and have mustaches. Count me in.” Valid point.