Did you know that this iconic actor is a real-life equestrian who has trained with showjumper Rodney Jenkins and currently lives on a farm in Virginia horse country?

The name Robert Duvall is synonymous with westerns, cowboys, and horses in Hollywood. True Grit, Seven Days in Utopia, Open Range, Something to Talk About and the iconic Lonesome Dove are just a few of his horseback roles, but the actor’s love for the animal began much earlier.

He was first introduced to horses at his Uncle’s ranch in Montana. When interviewed by the authors of People We Know, Horses They Love, Duvall stated, “that experience gave me the riding foundation to play in all the westerns I’ve done over the years.”

To prepare for his first riding role in 1963 TV series Stoney Burke, Duvall went to a rental stable in the Bronx to learn how to properly sit a horse. Later he moved to Los Angeles, where he went to the Pickwick Riding Stables, now renamed LA Equestrian Center, where he began to ride English. He trained every day for two years before landing the part in True Grit (1969).

In 1988 Duvall landed the role of a lifetime, Augustus McCrae from Lonesome Dove. To prepare for the extensive horse riding scenes Duvall began training with American showjumper Rodney Jenkins. 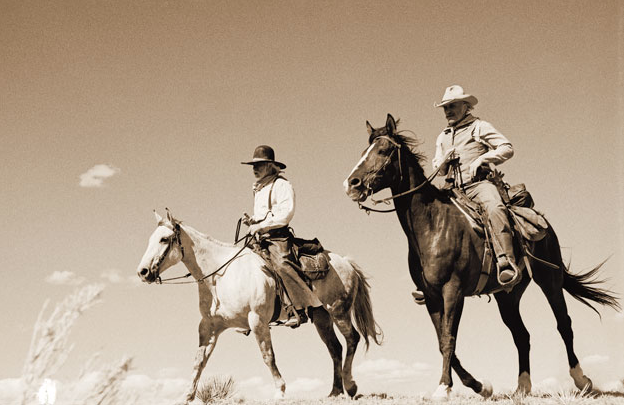 His main mount for the movie was a race bred Quarter Horse. He remembers, “I was on one horse that started to buck like crazy when squibs (blanks) were fired, and the director actually used that footage in the movie. I was really in shape during that time and was riding pretty well.”

Outside the western genre, Duvall learned how to jump for his role in Something to Talk About. Grand Prix showjumper Aaron Vale, in fact, was his double for the movie. Duvall recounts, “He jumped the whole course in the movie with one hand on the reins and the other one holding a handheld camera.” Duvall bought the horse “Willy” after filming wrapped. His wife Luciana competed him in hunters, winning a blue ribbon at their first show together.

Duvall stepped back into western stirrups for his role opposite Kevin Costner in Open Range, a role that he states was “a trail boss who was right up there with Augustus McCrae. He began filming the movie in Canada with six broken ribs, toughing out the injuries to drive horses up a hill at a canter. He said, “Fifteen years ago I would have done that scene in my sleep and it would not have been at all challenging, so it felt particularly rewarding to be able to do that again.” 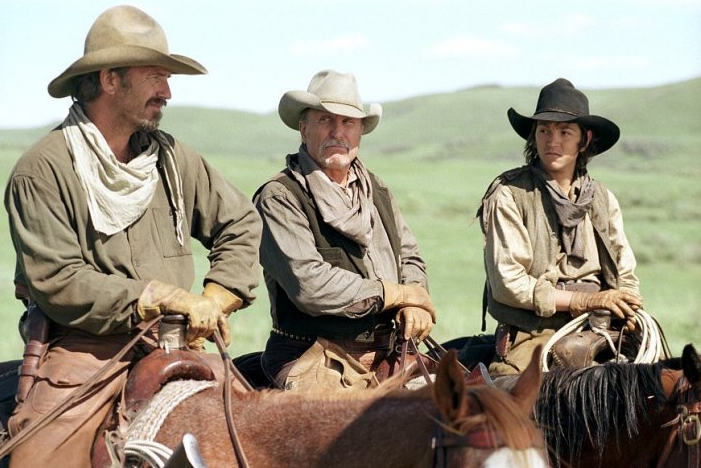 But Duvall’s love for horses isn’t restricted to the movies. He and his wife, Luciana (a horse lover who competed in her native Argentina before moving to the USA), own a 1743 farmhouse in Middleburg, Va., where he enjoys watching local foxhunting. Neighbors have included Rodney Jenkins, Katie Monahan Prudent, and David O’Conner just to name a few.

The actor’s Facebook is literally riddled with horsey snapshots from his everyday life. 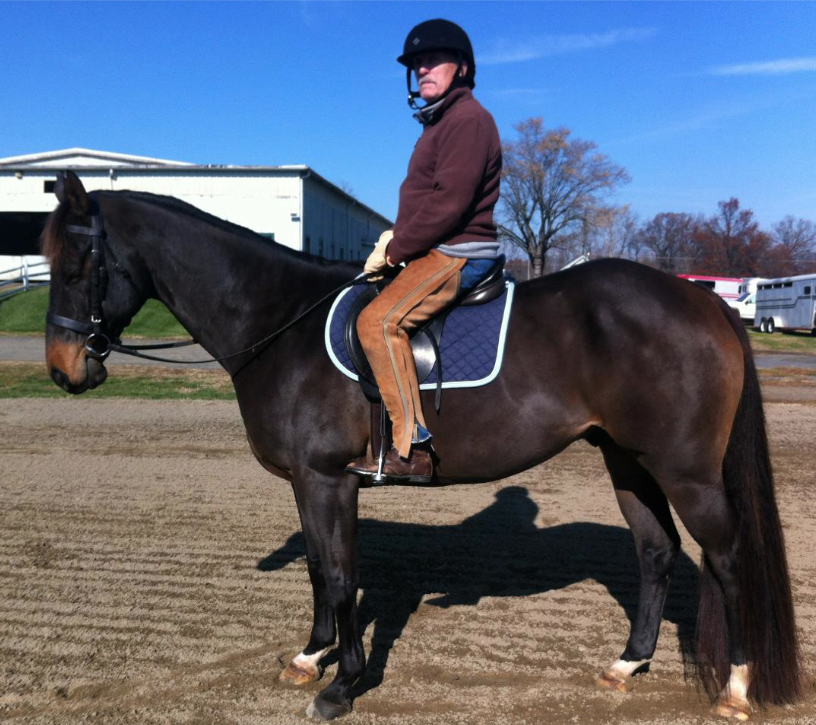 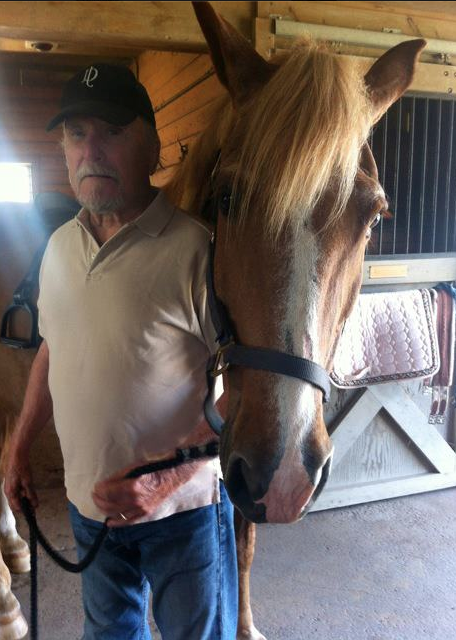 TODAY correspondent Jill Rappaport toured the 360-acre gentleman’s farm in 2012. Duvall’s horse, Manu, was training with Jesus Morales during the interview. Morales was also on site to train the 81-year-old Duvall for his latest horsey role, Don Quixote. 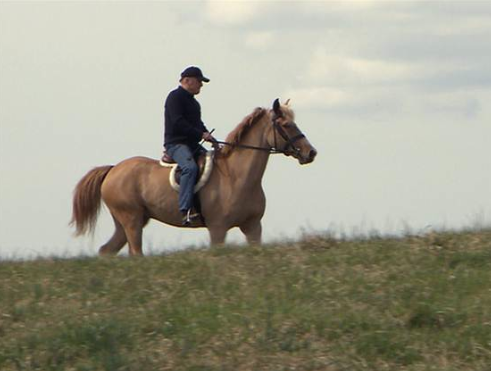 Duvall wrote on Heart of a Horse Facebook that Manu is an Arab/Thoroughbred/Andalusian born in Virginia. “When everyone came back from lunch, they said, ‘What is that big dog doing in the middle of our field?’ They finally realized it was a foal. Duvall visited the foal at two days old, when his wife surprised him with a yellow ribbon around its neck and a big ‘Merry Christmas!’ He is a real people horse, and loves following us around the property, running up and down along the fence, always looking to be fed. With his unique personality, he may well be in one of my movies sometime in the future.” 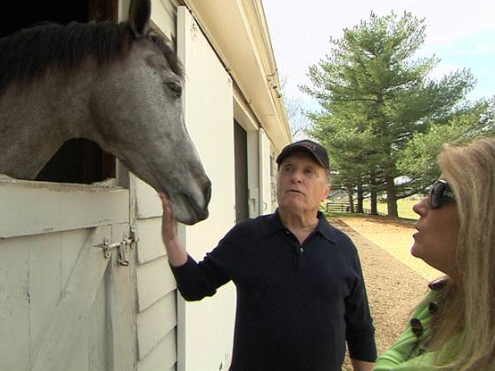 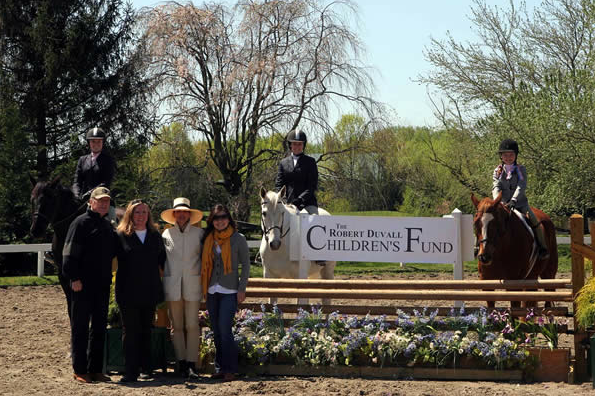 Duvall has said, “When you get on a horse and go nice and easy across country it makes you feel really good, it definitely does.” 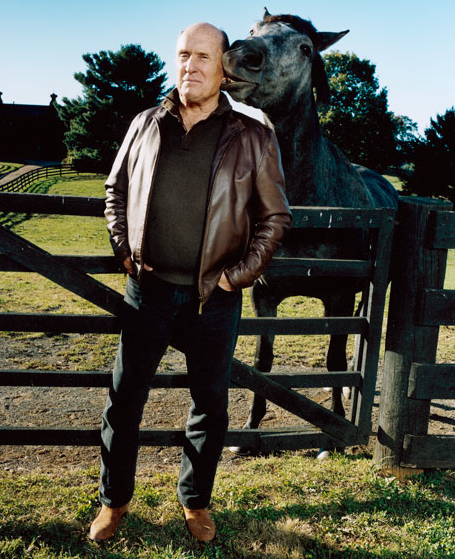