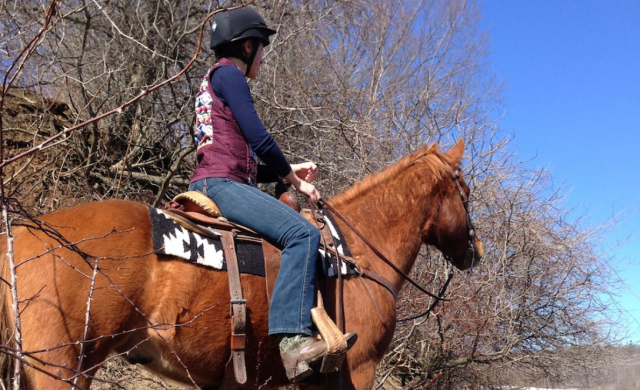 March is winding down, which means we’ve had three months to forget what we resolved.

Maybe it’s because I put it in writing and then had it published on the internet for the wide world to read, but I feel particularly beholden to keep up my New Year’s resolution this year. (Check out all of the HN writers’ equestrian resolutions for 2015 here.) It’s nearly April, which is traditionally the ideal time to check in on New Year’s resolutions, or at least the conventional ones like lose X amount of weight or exercise more or schedule more vacation time.

In the equestrian world, it’s a little different though, especially when so much of the equestrian life is centered around the summer–I (albeit vaguely) vowed to “be a better cowgirl,” which in western New York means doing very little riding in late winter. It’s just a sad, frustrating fact of life: we had a nice snow pack for awhile which meant we could go riding frequently, but then temperatures dropped down to dangerously-cold levels and we got a bunch of ice, which meant a lot more careful monitoring of the horses and livestock and a lot less snowy canters through the pasture.

So “being a better cowgirl” so far for me has meant using discretion in the face of unkind weather. But mercifully, this week there are finally signs that spring is sticking around–the snow is almost melted, the sun is shining and the horses are shedding, fat and sassy. I was able to get my two personal horses out for some ground work and a short ride the other day, reminding them that though they have been essentially feral the past two months, it’s time to get back in shape. I’m covered in mud and horsehair, but I’m happy.

My resolution to begin competing again is still in the work — hopefully. Spiderman was supposed to go board at the trainer’s this month as part of that plan, but unfortunately had a mental breakdown. He lost a shoe, ripped out half his tail and tried to saw his own head off with the stall door … all after three days. That’s when I brought him home. As they say, “Woman proposes, but horse disposes.” We’re back to the drawing board, but still shooting for our first show in June! I rode the agoraphobe his first day back and he worked beautifully. 🙂

My resolution to be more in the moment with my riding is going fairly well and I did NOT buy the absolutely lovely Idocus yearling I was drooling over so I will say that I’m doing better differentiating between needs and wants so far. Other than that though I don’t really have any awesomely exciting updates to add.

Mine is going well! I have had to remind myself several times not to get greedy with my baby horse, and it’s paying off in spades. He’s really understanding the concept of contact and he’s even jumping little gymnastics now! I’m so thrilled, especially since I don’t make it out to the barn nearly as much as I’d like to! Three days a week and he’s still as well behaved as can be. We’re still planning on blazing around Starter this year, but if all goes well I may look at taking him to his recognized debut at Beginner Novice this fall. 🙂

I think I was a little late to the resolution party, but here’s a bit of an overview of my goals and progress:

At the end of 2014, I resolved to learn and experience more in the horse world without spreading myself too thin (which has always been a challenge for me). Last year was such a big year for me all around, from training and showing milestones to reuniting with my pony of a lifetime that I sold a few years back. My goal for 2015 was to build on those experiences by joining and auditing more clinics, going to more shows as a competitor or a groom, pouring my heart and soul into projects I’m passionate about, and traveling more … again, while finding a balance between work and play.
And so, three months later, I find myself looking forward to a year filled with riding and artistic experiences with my gentle pony of a lifetime and my new jumping bean of a mare. I’m having fun organizing some clinics and schooling shows at my barn, and I’m finalizing the details of an awesome work and educational opportunity that will further develop my career in the horse industry. It remains to be seen whether I can pull all of this off without burning out in a spectacular fashion!

My resolution was to “have fewer goals and more fun,” which seems easy but for someone like me who lives life at 90mph it’s actually a challenge! So far, though, so good — although it’s not entirely of my own doing. My hectic schedule has kept intense training and showing off the plate for several months; sometimes when I get to the barn all I have time to do is give my horses a hug and a good curry. Speaking of which: horses, plural, is a recent development. Earlier this year, my special childhood horse (now 24 years old — we’ve been apart for 16 years) came back to me, as his owners were selling their farm. Reconnecting with him has been a great reminder of what it was that drew me to horses in the first place: not the ribbons, but the magic.

How about you, Horse Nation? Working on your resolution, or have you realigned your goals? Have any plans for 2015 that you’re working towards? Share in the comments, or head over to our forums Equestrians Anonymous to discuss with your fellow horse-addicts.