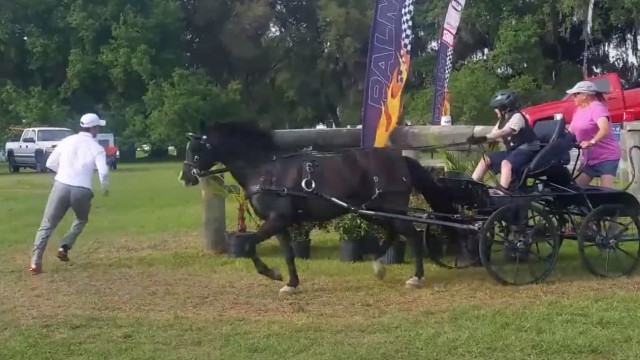 Riley Wiltison gets an unorthodox masterclass from a combined driving legend.

Unlike contributor Lisa Lach, who sent us daily updates direct from Ocala, Florida throughout Live Oak International, I was stuck at home, miles away from the sunny south and world-class combined driving all weekend long. Unable to catch the USEF Network’s all-day live showing, I was instead relegated to constantly refreshing the YouTube page, hoping that highlight videos would be posted. I even tried searching directly for “Chester Weber,” hoping that maybe someone from his crew had videoed parts of his performance. I didn’t find any such videos of Chester driving, but I did, intriguingly, find this:

Mr. Weber kindly took a few minutes of his day to answer my questions on just what was going on here. The wee tot at the lines is Riley Wiltison, driving “Doll House Shenanigan” through Hazard 7 at the Live Oak International grounds. “He’s a delightful young guy!” said Chester, “maybe 8 or 9. His parents asked if I could meet him when we were at the Florida Horse Park, and I met him, and then offered him a lesson.”

So on Sunday, after the competition had wrapped up with another win under Chester’s belt, he headed out to the marathon course with Riley and his pony for their lesson. “When you’re driving, you have to look where you’re going, but many students will stare at the horse. It’s like driving a car and only looking at the hood ornament,” Chester described. “So I said, okay, catch me!”

Chasing Chester through the hazard definitely encouraged Riley to keep his eyes up and ahead, and as Chester described, helped him drive by feel. Chester then climbed aboard the cart to go through the hazard again, the master helping to point out the route to his student.

“I’ve never said no to helping someone, especially if they’re passionate,” Chester stated. Which is how the 2014 WEG individual silver medalist found himself jogging around Live Oak with a pony in hot pursuit. He was about the same age as Riley when he started driving, and his first competition was at age 13–so who knows, perhaps Chester was mentoring the next world champion. Time will tell–but if Riley stays passionate and works hard, Chester better get ready to run faster next year.