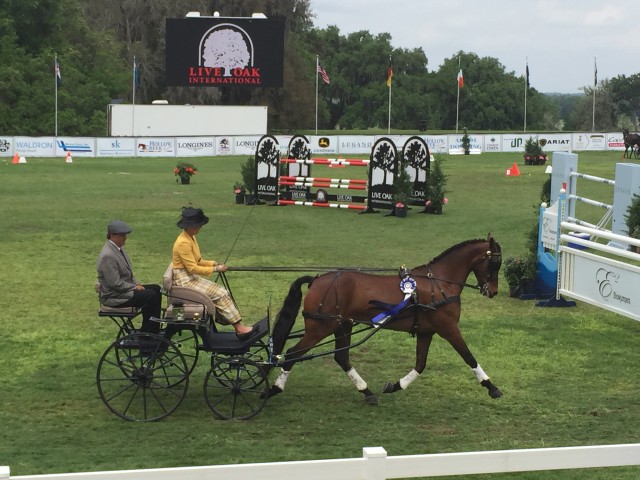 World-class combined driving is center stage this week at Live Oak International, taking place March 18-22 in Ocala, Florida. Lisa Lach brings us a report from the fourth and final day of competition.

The final phase of the Combined Driving Event at Live Oak was cones, which roughly correlates to the showjumping phase of eventing. It was an exciting morning, with several drivers within a point or less of the leaders.

There was plenty of shuffling around in the ranks, and even a few surprises. In the FEI Pair Horse division, Casey Zubek seemed to be a lock for the win, but ended up in third place after a tough course. Misdee Wrigley-Miller took home the second place after a close race with Allison Stroud that had her in third before cones. Boots Wright and Max Montoya, however, each finished with a great cones round to take the Intermediate Pair Pony and Intermediate Pair Horse divisions.

But of course, the top honors went to the king of driving, Chester Weber, in the FEI Four-in-Hand division. Watching him drive is amazing because it’s as if the horses are just extensions of his own two arms. It’s pretty inspiring to see.

The afternoon brought us more exiting showjumping with the CSI** Hollow Creek Farm Winning Round. The course was extremely challenging, with only three riders going clear within the time allowed. There were a couple of spills on course as well, but no injuries to riders or horses.

In the winning round, Margie Engle put in a blazingly fast course on Eckham Van Het Steentje, which held up as the top spot until the end. German rider Andre Thieme came in second-last on Conthendrix, and shaved just over a second off of Margie’s time, leaving the pressure on for the final rider, Cian O’Connor.

It just so happened that all the power to the big screen cut out right at this moment, so as O’Connor rode we were unable to see how his time was matching up. It was very tense! In the end, he couldn’t quite catch Thieme, but squeaked past Margie by 0.10 seconds to take second.

Via USEF Network, which provided great live streaming coverage throughout the weekend:

The second place was good enough for O’Connor to clinch the Leading Rider Award. Chloe Reid of the USA was the Leading Amateur Rider as well as the judge’s pick for most stylish this weekend. Congratulations to them both! 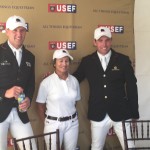 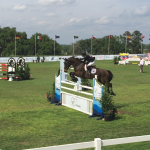 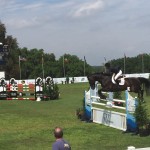 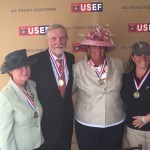 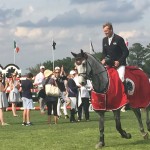 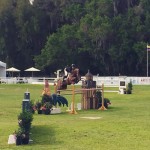 After four full days of watching top drivers and jumpers, I have three main takeaways:

Lisa Lach has been riding for 17 years in a variety of disciplines. She currently rides at Lakefield Farm in Grafton, WI, where she competes in the hunter ring and rides anything she can get her hands on. In her free time, she works at her small equine industry marketing business, Top Line Marketing, and blogs at Centered in the Saddle.