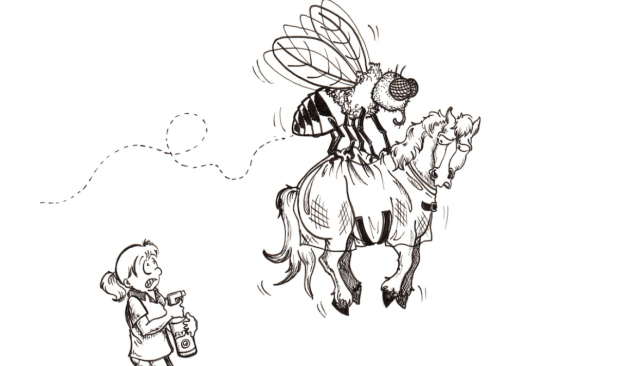 This farm ain’t big enough for the both of us.

Via Morgane Schmidt/The Idea of Order

This story was originally published on March 24, 2015.

Go to Walmart and buy the cheapest bottle of fly spray you can find to save money. Douse your horse every five minutes around the clock. Now that you have wasted your money, didn’t repel one fly and learned that the cheap stuff doesn’t work, move to step 2.

Buy heavy-duty fly spray, preferably the most expensive one possible with the highest concentrate of poison. Realize after spraying you have to reapply every two hours, not every two weeks like the bottle says. But, now you’re getting somewhere — you can actually see the flies dying on contact and you also have developed early onset of Parkinson’s disease from inhaling this $25 dollar poison in a bottle that is killing you just a little bit slower than the flies.

Invest in chickens. Chickens eat some of the flies. Chickens also attract coyotes and poop everywhere. Now you have chicken crap everywhere which is attracting the flies the chickens missed, a coyote problem and another feed bill. Get grossed out every time you now eat chicken because you’re remembering what their last meal was.

Dream of the winter months when flies magically disappear.

Trade your chickens on Craigslist for fly bags. Now you have to explain to everyone who visits your place why it smells like there’s a dead body rotting somewhere on your property.

Invest in fly masks, sheets and leg wraps. Learn your horses think it’s a game to see whose fly mask gets ripped off first, and bonus points if they rip anything in two pieces.

Buy that commercial-grade fly paint that kills everything within a five-mile radius. Accidentally kill your neighbor’s pet Chihuahua … that you hated.

Go all-natural with apple cider vinegar in the water troughs. Pay the vet $600 to tube your horse with mineral oil for the impaction colic from not drinking for three days.

Have better manure management. Realize your new stable hand just tossed out all the poo with a month’s salary worth of fly predators in it.

When all else fails, and you have spent the cost of a new Mercedes trying to fix your fly problem, move to step 11.

Accept the fact that you’re the Lord of the Flies and learn to like them since you have to live with them.