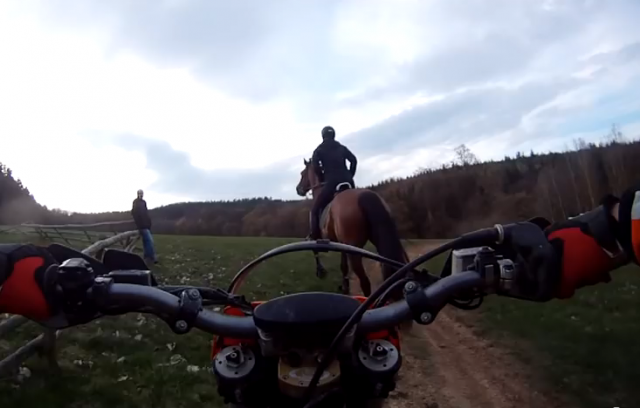 Which has the most horsepower?

After seeing this video of a horse taking on the trails alongside a mountain bike, I got to thinking about dirt bikes. My boyfriend is into the “things you ride that don’t have brains,” as he likes to put it (he doesn’t believe that I ride something that has a mind of its own!), and in riding them myself I’ve found a lot of similarities to riding my horse.

So how would a horse fare in close quarters with a dirt bike? Sure enough, YouTube didn’t fail me when I tried to find the answer:

This level-headed horse is unfazed by not just one but two noisy dirt bikes, one in front of and one behind her. Not to mention, the trail the group embarks on is not an easy one, filled with terrain and natural obstacles.

Was anyone else impressed by the dirt bike hopping over a small jump with ease? Dirt bike eventing, anyone?

It’s pretty neat to see a horse who keeps a cool head in situations such as these, and everyone involved seemed to be having a great time. Heck, it sure is something I would try! My horse would be ok with it … I think. How do you think your horse would fare on a dirt bike trail?

Whether you’re hitting the trail, the field, or the arena, Fleeceworks has a product that can help your horse reach his highest potential. With products designed for virtually every discipline, there truly is an option for everyone. Click the banner below to find out more!