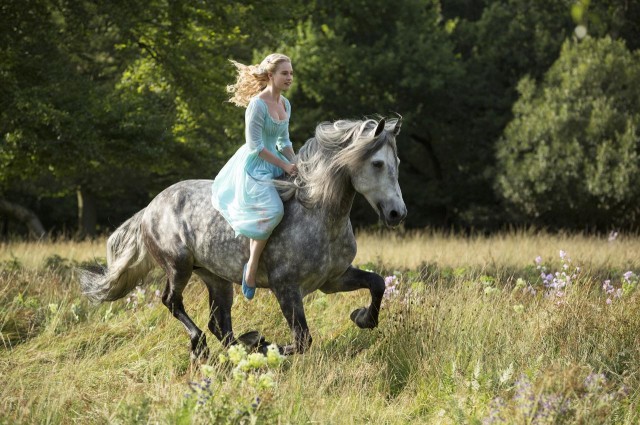 In the spirit of recent Hollywood Disney adaptations, the live-action portrayal of the story promises a few changes. Judging by this picture released in 2013, I’m very hopeful Cinderella is no longer being portrayed as a “damsel in distress.”

Bareback and bridleless? Color me impressed, Lily James. Lily James reportedly fell in love with riding when she began riding lessons four months before shooting. She said to Interview Magazine, “I did most of the horse riding myself because I learned. Once I got the part, Ken asked if I could ride because he had this idea that she should be on a horse a lot. It actually ended up unlocking a lot of her character; the act of riding gave her a strength and womanliness that otherwise—because in a way, she’s passive. A lot of things she lets go.”

“Putting Cinderella on a horse gave her a power and strength that she needed to be a rounded character and someone that you could look up to.” — Lily James, Interview Magazine

In a second photo released by Disney, Cinderella appears to meet her ‘Prince Charming’ on the cross country ride. Charming is played by none other than Richard Madden, famous for his portrayal of the eldest Stark brother in Game of Thrones.

This exclusive clip was just released.

Director Kenneth Branagh had this to say to Telegraph UK, “In the Disney animation, Cinderella and Prince Charming first meet at the ball. In our version they meet on horseback after Cinderella, or ‘Ella,’ played by Lily James, helps a stag being hunted by the prince, Richard Madden, to escape. Unaware that he is a prince, she has a feisty conversation with him about why he is hunting. Ella’s relationship with the natural world is fundamental to the film. We chose not to focus on the rags-to-riches story but on her compassion – her mother’s dying words were, ‘Have courage and be kind.’ We shot this in a beautiful part of Windsor Great Park among oaks that are older than Shakespeare.”

“We wanted the riding to be real. They worked with a horse wrangler for several months, and Lily practiced hard at staying on a horse at full gallop.” — Kenneth Branaugh, Telegraph UK